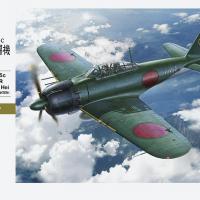 Sometimes considered as the most effective variant, the Model 52 was developed to again shorten the wings to increase speed and dispense with the folding wing mechanism. In addition, ailerons, aileron trim tab and flaps were revised. Produced first by Mitsubishi, most Model 52s were made by Nakajima. The prototype was made in June 1943 by modifying an A6M3 and was first flown in August 1943. The first Model 52 is said in the handling manual to have 製造番号 (seizō bangō, or production number) 3904, which apparently refers to the prototype.

Research by Mr. Bunzo Komine published by Mr. Kenji Miyazaki states that aircraft 3904 through 4103 had the same exhaust system and cowl flaps as on the Model 22. This is partially corroborated by two wrecks researched by Mr. Stan Gajda and Mr. L. G. Halls, production number 4007 and 4043, respectively. (The upper cowling was slightly redesigned from that of the Model 22.)

A new exhaust system provided an increment of thrust by aiming the stacks aft and distributing them around the forward fuselage. The new exhaust system required "notched" cowl flaps and heat shields just aft of the stacks. (Note, however, that the handling manual translation states that the new style of exhaust commenced with number 3904. Whether this is correct, indicates retrofitting intentions, refers to the prototype but not to all subsequent planes, or is in error is not clear.) From production number 4274, the wing fuel tanks received carbon dioxide fire extinguishers. From number 4354, the radio became the Model 3, aerial Mark 1, and at that point it is said the antenna mast was shortened slightly. Through production number 4550, the lowest exhaust stacks were approximately the same length as those immediately above them. This caused hot exhaust to burn the forward edge of the landing gear doors and heat the tires. Therefore, from number 4551 Mitsubishi began to install shorter bottom stacks. Nakajima manufactured the Model 52 at its Koizumi plant in Gunma Prefecture. The A6M5 had a maximum speed of 565 km/h (351 mph)) at 6,000 m (20,000 ft) and reached that altitude in 7:01 minutes.

The instruction sheet is typical of Hasegawa, and a small sprue of polycaps is included.

Construction begins with the seated pilot figure (which I did not include here), who is provided on a small sprue of tan, softer plastic. Think “Dragon DS” for the consistency. I will say, the figure is very nicely rendered, and a choice of three heads is included. Then, it’s on to the cockpit. I’m sure there will be resin aftermarket sets developed for this kit, and Eduard already has a full PE set available, but none of it is really needed. The cockpit is exceptionally well-detailed OOB. The only thing missing is a seat harness. I used Radu Brinzin’s set, which consists of PE buckles and paper straps. I don’t generally do well with these paper sets, but this time I got lucky. I’m pretty happy with the results.

A couple of stiffener bulkheads provide support for the fuselage halves, as well as a small aft one involving the tailwheel assembly. If you can figure out a way to save the tailwheel installation until after the model is done, do it. I couldn’t, and I snapped it off twice. The gunsight is assembled with 4 pieces, 3 of which are tiny, clear lenses. I outlined each one’s edges with a black Sharpie while they were still on the sprue, then carefully attached them. Same for the armored glass. Part Y2 is a clear part that replicates the armored head glass behind the pilot. I masked it using Micro-Sol’s liquid masking stuff, applied carefully with a toothpick. This worked out pretty well, and only minor touchup was needed.

Wing assembly is next, after securing the cockpit between the fuselage halves. Don’t forget to drill four 1.2mm holes to receive the fuel tank assembly later in construction. Part of the wheel well is a long stiffening spar, which also assures correct dihedral. Rib tape and stitching texture on fabric control surfaces are delicate and rendered nicely. I saved adding the really well-detailed gun barrels until everything else was finished. And, looking at my photos, I forgot to touch up one of the where I scraped off a molding seam.

The landing gear is next. Hasegawa provides separate brake lines, which I think is a very nice detail. Be careful separating them and cleaning them up, as they are fragile! They look very nice, once assembled and painted. The only negative thing I have to say about this kit is, the landing gear doors have ejector pin marks on them. They’re cleaned up fairly easily, but still…

Other than that, the gear doors are nicely rendered.

The Sakae 21 engine consists of 10 parts, including the exhaust matrix. Like the rest of this kit, it is nicely detailed, and there is room for adding as much more as the modeler would like. I sprayed mine with Alclad II “Aluminum”, then washed it with lamp black ink. The exhausts are a little tricky to line up correctly with the exhaust collecting ring, but with a little bit of patience, this is achieved without too much drama The model was painted with a combination of Tamiya and Gunze-Sangyo acrylics. A wash of Burnt Umber oils was applied. The decals, which were all in perfect register, settled in well with Micro-Set/Sol.

The rest of construction consisted of adding the final details, such as the formation lights, etc., and masking the canopy. You are provided with two versions- open or closed. I chose open, and the sliding section of canopy sits snugly where it should. Machine gun barrels were added, as was the radio mast.

Hasegawa has, with this kit, provided the modeler with an easy, enjoyable project which results in an accurate, detailed model of one of the Allie’s most nefarious adversaries. Highly recommended!

My thanks to Hasegawa USA and IPMS for the review sample.