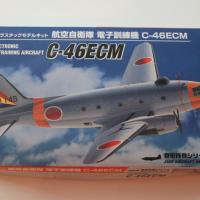 The Curtiss C-46 Commando was a transport aircraft, manufactured by Curtiss Wright Co. and the first flight was March 1940. There were 36 C-46 delivered to the JASDF and they served as JASDF’s main transport aircraft. Serial numbers 140, 143, and 145 were converted to C-46ECM and served with the Electronic Warfare Training Squadron of the Air Defense Command. Each of these three aircraft were configured differently resulting in all three aircraft having different antenna locations. C-46ECM No. 143 is on display at Tokorozawa Aviation Memorial Park, and No. 145 is on display at JASDF Iruma Airbase.

The kit is produced by Platz, a well-known maker of 1/144-scalekits. The kit arrives in a very colorful box with artwork of C-46ECM No. 145 displayed on the top. The bottom of the boxshows No. 145 displayedin Top, Bottom, Right Side, and Left Side views showing markings and colors. Aircraft No.s140 and 143 are shown in profile views as well. Also shown on the box bottom are the suggested colors required identified by Mr. Color and FS call outs, and an image of the decal sheet.

The kit consists of 63 parts and comes on four sprues, three grey, and one clear. The parts are nicely molded, with no flash, fine panel lines, and small sprue gates. The 6 page instruction sheets show the suggested assembly through 7 steps starting with the cockpit assembly and progressing through fuselage, main wing, main landing gear (left and right), assembly of wings to fuselage, and antenna installations. Early in the construction process you need to decide which aircraft you are going to build. Aircraft No.s 145 and 140 have a nose radar installed, which requires an additional step in the cockpit construction. Aircraft 143 does not have nose radar and its construction is straightforward.

I painted the overall aircraft using Tamiya AS-12 Bare Metal Silver, and then masked and painted the underside of the engine cowlings and nose radar dome with Tamiya Matt Black.

The decals are printed in bright colors and are within registry but were slightly too thick. The cockpit orange nose and fuselage band are provided as decals. Try as I might I could not get either of the decals to lay flat. There are two cockpit nose decals given. On the first try for the cockpit nose decal I tried to lay it down using water and then using Micro Sol and Set solutions. The decal would not lay flat over the contoured nose surface no matter how many coats of the setting solutions were used. I removed the first set of cockpit nose decals. On the second set I tried cutting the nose decal into smaller sections and fitting them on piece by piece. Still the contoured nose section prevented them from laying flat. The fuselage band decal would not lay flat over the tail fillet no matter how many coats of setting solution I used. So in the end I masked and sprayed both the cockpit and fuselage band with Tamiya Orange. The rest of the decals were laid down with no issues.

Overall the kit is a joy to build and builds into a nice C-46. The fine panel lines and the detail are exceptional for a kit of this scale.

My thanks to Platz and IPMS USA for the opportunity to build a kit I normally wouldn't have chosen. I look forward to building Platz kits in the future.