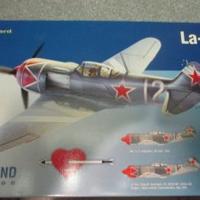 The Lavochkin La-7 was a logical development of the highly successful radial engine fighter, the La-5, which was itself an improved LaGG-3 all wood fighter which, while having reasonable performance, was not satisfactory as a first line fighter at the beginning of the “Great Patriotic War”, as the Russians designated World War II. While the LA-5 went through numerous changes during its production life, it became obvious that the 1820 hp. Ash-82FN radial engine had reached its development peak, and that there was no suitable replacement for this engine, as the Ash-71F radial of 2200 hp. was unreliable and unsuitable for service use. Therefore, the Lavochkin Design Bureau decided to upgrade the basic La-5 design, making aerodynamic refinements on a prototype designated La-5 (206) which included a new cowling, oil cooler location, supercharger intake, exhaust cover outlet, and radio mast shape. The wheel well doors were modified, and various air intakes were cleaned up. The overall results caused an increase in maximum speed, from 339 mph. to 371 mph. at sea level, making it faster that the production Focke Wulf FW-190A-8, its main adversary.

The aircraft entered production in 1944, and the type was armed with two 20 mm. ShVAK cannons with 200 rounds per gun. The last production models had three cannons, all mounted in the cowling above the engine. By late 1944, many La-7s had been issued to Soviet fighter units, and some problems developed, mainly associated with engine failures due to dust intake, and one batch had to be completely rebuilt due to faulty manufacturing of the metal wing spars, causing structural failures in flight. Altogether, over 5,900 La-7’s were built in 1944-45.

However, the La-7 was probably the best radial engine fighter the Soviets had during the war, but due to the fact that much of the airframe was wooden, they did not last long after the war. The Czechoslovakians were the only foreigners to operate the type, and they kept the type in service long after the Soviets scrapped theirs. A few have been preserved in museums.

Eduard has been producing kits for some time now, and their reputation has grown with each issue. The La-7 kit was new to me, although I have built the KP LA-7, and several other La-5’s from Frog and Voko-Gran. This is probably the best La-7 kit to emerge so far, and it was an enjoyable build. Molded on one sprue ot light grey styrene and one clear sprue, the kit also includes a glue-on seat belt that looks very nice when installed. The fuselage and wheel well interiors are nicely done, and the decal sheet provides markings for two aircraft.

Along with the kit, I received a photo-etch detail set, which includes more parts than you’ll ever be able to use on this kit (including some duplicates, as the parts are VERY small, and I guarantee that you’ll lose a few during the construction process). Also included was a mask set, which provided cutouts for the glass parts. These were very easy to use, and saved a lot of time in the painting process.

The kit goes together rather easily, although there are no mounting pegs and holes to help line up some of the parts. This was not, however, a problem. A little filler is needed for the main fuselage and wing joints, but this is normal for any kit these days. The lower wing section has a very weak joint ahead of the wheel wells, and mine broke, but when attacked to the upper wing panel, it wasn’t a problem. The wing dihedral automatically adjusts itself correctly, and the parts fit tightly together. The horizontal tailplanes snap into place easily. There is no engine, but you couldn’t see it if it was there. There is a flat plate with fan blades, which show behind the spinner. The instructions say to paint them black, but photos in the Squadron La-5/7 book show them to be a lighter color, so I painted them light grey, although they could have been silver. The prop is made up of a rear hub, three individual blades, and a spinner, with the entire unit going together with no alignment problems

Two marking choice are provided with the kit decals:

Both aircraft have standard light blue undersides with pale grey and medium grey topsides. I used Model Master Soviet underside blue, with topside light grey and RAF Dark Sea Grey above. Both aircraft have red noses, and these can be painted before being attached to the fuselage, making painting easier. One problem I ran into was the silver bands that were fasterned to the cowlings for strengthening. These appear on many Soviet radial engine fighters, and they would have been removed and replaced many times, so they should go on top of the marking decals. The instructions say to paint them silver, but this would be difficult. It would have been better if the kit decals had the long silver stripes on the sheet. I used some silver strips I had, and they worked OK, although I wasn’t entirely satisfied.

The La-5 had silver panels behind the exhaust stacks, as the plane had an exhaust system similar to that of the FW-190A. These should be painted silver and masked off, and later oversprayed with black to simulate the exhaust stains. Since the airplane was basically wood, weathering and paint chipping was probably minimal, so I just dulled it down a little. The result was acceptable.

One problem was the positioning of the main hatch. Since there is added detail in the cockpit, the hatch needs to remain slid back. However, although it fits perfectly in the closed position, it sits up too high when it is in the open position. I still left it open, as I wanted the cockpit interior to remain visible. There is another clear part allowing the hatch to be closed, and that is another option.

This is a good little kit, and is probably the best La-7 available. It is a lot less work than upgrading an La-5, and certainly a better kit than the old Frog kit that I built alongside this one for comparison. If you get the photo etch sheet, however, it ceases to be a weekend build, unless you stay up longer than I usually do. Mine was completed in about 5 days, but I only build for a few hours at a time. Get one of these. They are very nice kits.

Thanks to Dick Montgomery, Dave Morrissette, and Eduard for the review sample.