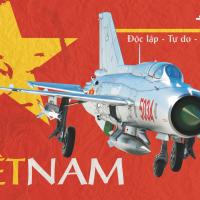 The MiG-21 attributed itself during the Vietnam War quite well against the US Air Force and US Navy. The small fast airframe accompanied with the limitations imposed by the US command allowed the Vietnamese Air Force to reach something close to parity.

Eduard has released the MiG-21PFM previously but this boxing is specifically targeted to the Vietnamese use of the airframe.

The boxtop features a beautiful rendering of the real thing on a red background with Ho Chi Min in the background. The parts are contained in a sturdy cardboard box with seven sprues of light grey plastic. A sprue of clear is provided. Two photo etch parts are included. One is pre-painted and one is in brass. Masks are provided for canopies and wheels. There are two sheets of decals. One is the stencils and the other has all the markings for FIVE aircraft. Markings are fairly uniform in Vietnamese service. So you could mix and match to make others with the provided red numbers. The decals are thin and printed by Eduard.

The instructions are printed on high quality paper in full color. You will need to determine which version you want to do so that you can open the appropriate holes for the drop tank and wing pylons. Let’s get started.

Constructions start in the front wheel well. It is attached to the bottom of the cockpit so it has to be assembled first and then the cockpit parts are added on top of that. There are two options on the instrument panel. The first one is using a decal, which is nice, but flat. The other is the pre-painted instrument panel is quite nice. I painted my interior with Gunze light grey. The Vietnamese MiGs apparently had a grey interior as opposed to the turquoise colored interior used by the Russians. After some research it is correct in the light grey interior color.

Once the tub is assembled, Eduard has you jump to the engine exhaust and afterburner can. The fit of the afterburner is quite good. Pay attention to the orientation of the parts and you’ll have no problem. You will have to fill some seams on the can for a good look. It is far in there so it doesn’t have to be flawless but should be filled.

Adding nose weight is essential to prevent a tail sitter. Do this prior to closing up the fuselage. I added weight in the nose cone with epoxy and some ball bearings. In assembling the fuselage make sure you have everything in there. The bulkheads make the fuselage very sturdy. The fit of the fuselage is perfect. You don’t have to fill the seam on top of the fuselage behind the cockpit as it will be covered. I recommend that you protect the point of the shock cone as it is very pointy and you want it to stay that way. I used tape wrapped around the tip to save mine. I did leave off the front cowl ring as it had to be painted a darker color than the airframe so it was just easier to paint it off the model and add it later in the build.

The spine and vertical tail are added now. I did have to use a little bit of filler to fair in the spine to the fuselage. Very little. I could have probably cemented it in place better.

The lower portion of the wing is easily assembled as long as you pay attention to where the little arrows are pointing when dealing with the small round air bottles. DO NOT forget to add the clear parts for the landing lights at this time. I backed mine with Bare Metal Foil and attached them in place. Also while you are working here don’t forget to open up the appropriate holes for the drop tank, missile rails, and wingtip antennas. I elected to leave my airbrakes up as I was not looking forward to cutting them out.

Adding the lower wing to the fuselage was not an issue. I did have to pay attention to make sure the front and aft portion were aligned properly. When I do this again I’ll glue the front first and wait for it to dry then do the back. I got a good fit regardless but I think this will be an easier way to do it next time. Eduard would have you add the horizontal tail surfaces now but I left them off until after painting. The various intakes and exhausts were added now.

The upper wings are brought into place now and the fit was stellar. Pay attention when adding the actuator covers so that you get the orientation correct on them. I left the flaps and ailerons off until later because they would be painted slightly different than the wing and this way I didn’t have to mask them. After the natural metal paint was added it was easy enough to add them as the fit is superb.

Building the landing gear and doors is the most challenging part of the whole build. First thing you have to do is establish the angle of the doors. You literally have to bend them into the 28 degree bend. Simply align the bend point on the part and then test it to the drawing on the page. It’s simple. The hard part is to bend the photo etch to fit the door and wheel well. If you take your time the trapezoid actuator for the gear doors is a thing of beauty. Good reference pictures help here. I recommend the Squadron/Signal walk around books. I also recommend that you assemble the trapezoid mechanism with the gear already installed the fit is very positive and mine aren’t even glued on, but doing it this way will ensure that the mechanism will fit properly. I didn’t and one of mine was fouled when I installed the gear and had to be broken off and repositioned properly. I painted the wheel well, gear doors and struts prior to assembly. Then this area was masked off.

The fit of the nose gear strut is ‘interesting’ but once assembled and allowed to dry it is quite sturdy. I had my doubts. Follow the instructions and you’ll be fine. I recommend that you add the nose wheel prior to adding the strut to the wheel well, just in case. The nose gear doors were left off as were the fuselage gear doors. It just made painting easier.

The upper portion of the forward fuselage was added and some small bits and bobs, including the Master pitot tube on the nose. I just knew I’d damage that plastic one and keeping a round cross section is always something I find difficult. I prefer turned metal barrels for their strength, cross section and I was not disappointed. Master points out that the pitot tube is not parallel to the ground but angled down slightly.

I then masked off the wheel wells, gear, and cockpit. The entire model was wiped down with plastic prep and the whole model was given a quick coat of Alclad Grey Primer. This was sanded back slightly and some areas were touched up but remarkably not much. After another coat of primer, I sprayed the entire model with Alclad Aluminum. Then various panels were masked off and sprayed with a variety of Alclad colors and some AK Extreme Metal. Pay attention to the Eduard instructions, there are various shades implied on them. I was painting what I thought would look good but after I had painted some panels I found some pictures in the Squadron book that showed Eduard was correct. So I had to go back and repaint some portions of the model to more represent what I saw in the photos and Eduard’s instructions. I should have taken stock in Tamiya tape.

Once I was happy with results, I masked off the areas that would be green and sprayed them Tamiya Green. Then the whole model was given a coat of Alclad Aqua Gloss in preparation for the decals. The decals performed well except for the missiles. I had some serious silvering issues. As this was the only place that I had a really bad experience I think it was my fault. The rest of the decals all worked well. I did have to slice the national markings to get them to lie down in the panel lines. I think my Solvaset may be going bad.

Once everything had dried overnight, the model was given another coat of Aqua Gloss. I decided to try some new techniques for me. I used AK Panel liner in Blue Black. I applied it and allowed it to dry. Then using a cotton bud I removed the excess. I intentionally left some on there to represent dirt and rain marks. I streaked it front to back on the wings and up to down on the fuselage. I was actually quite happy with the results. I applied some Alclad Semi-Gloss finish to the national markings to flatten them out a little bit. I liked the way they came out.

With that it was time to build up the ejection seat. That came together really well with the pre-painted photo etch working out even better than expected. The whole seat was given various washes and then a final flat coat was added overall to it. It was installed and the fit was perfect.

The gunsight and rear view mirrors were added to their appropriate canopy section before adding the canopy. The canopy fit perfectly. The additional parts were added, like theh drop tank and the pylons.

The missiles were painted Alclad White Primer and the black stripe was added. The tip was given a coat of black and then painted with a drop of smoke to represent the seeker head. A gloss coat was added and the decals applied. Some did not like the gloss coat. I should have used Future or a thicker coat. While the Alclad White Primer is a perfectly opaque color it doesn’t lay as smooth as I would like. I will continue to use it for my white and be more aware of needing a thick gloss coat. While glossy I used another panel line wash and removed the excess with a cotton bud. Then the missiles were given a coat of flat and attached to the model.

After that it was just a matter of adding a few things, like the IFF antennas (photo etch parts above the tail and below the nose), static wicks on the tail surfaces and paint the position lights. You just know that those antennas and wicks won’t last but they look nice now. Adding the Master Models pitot tube to the front and with that the model was finished.

I really enjoyed building it. This is my third Eduard MiG-21 model. A couple of things to take away, the side panels in the cockpit are vertical and fit onto the horizontal panels and don’t forget to add nose weight. The fit of the kit is exceptional. The fit of the photo etch pieces is also perfect. The landing gear being the hardest part to do but even that worked well. Overall, I love these models. They are near perfect and look great when completed.

Thanks to Eduard and IPMS/USA for the review copy. You can obtain your copy by contacting Eduard at www.eduard.com or at your local hobby shop or online retailer.