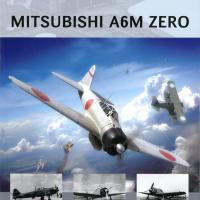 There is no question that the Mitsubishi A6M Zero is one of the most famous and recognizable aircraft of the Second World War. From its early days of domination over the skies, to the end of the conflict where the once seemingly invincible aircraft was relegated to Kamikaze missions; the Reisen saw service throughout the war in Japanese Naval Air Force service.

Author James D’Angina tells the story of the Mitsubishi A6M Zero in Osprey Publishing’s Air Vanguard #19. Chapters are broken down as follows:

What you get here is a small book that really is packed with information for the Modeler, or the Historian. The book begins with a brief history leading to the Development of the Zero, including a short biography of Dr. Jiro Horikoshi – the ‘Father of the Zero’, as well as the prototype requirements and flight testing.

The main focus of the book is on the different variants of the Zero. This book does a nice job of summing up everything in short, concise format. Each major type and subtype is explained in a few paragraphs and information is included on both the standard fighter variants, the two different trainer models, as well as the floatplane version. I really don’t think I have seen a book sum up the somewhat complicated nomenclature of the A6M family as well as this book does. Everything is broken down in easily understandable language and the reader is presented with the differences between models. There is even a section detailing the differences between the Mitsubishi and Nakajima built A6M2 fighters.

The Operational History section of the book overviews the major engagements of the Zero throughout the war. The section is general overall, but contains specific details which leave the reader interested in learning more.

Also included in the book are a nice selection of both historical images, and modern color photos from surviving aircraft. Illustrator Adam Tooby has provided some really nice color profiles for the book which complement it very well. A nice touch is the fold-out back cover which has a cutaway Zero in color artwork.

I do highly recommend this book to anyone interested in the Zero. For those who already have other references on the subject, this book breaks things down into a compact “quick glance” summary that is concise and well laid out. For those new to the Zero, this title does a nice job of really explaining the A6M variants and variations that even the non-modeler/historian can follow.

Thank you to IPMS/USA and especially to Osprey Publishing for providing the Review sample.