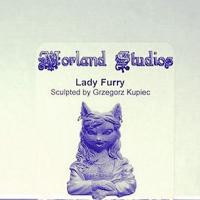 Lady Furry is a one-piece resin bust that is 100mm tall, or approximately 1/17th scale. The kit comes with two metal hoop earrings that can be added to her but does not include a plinth for display. There are no color suggestions for the kit.

First off, let me warn you, I am not a figure painter…yet. I have been trying to improve this side of my modeling skills, as I want to do some dioramas. I have a few large-scale figures under my belt, namely Spiderman and Green Lantern. Painting them is about as far away from painting Lady Furry as possible, but sometimes, it helps to step out of your comfort zone. Boy, is it chilly out here.

The initial step was to clean up the casting. There are a couple blocks under the front of the figure around the hand area, and these were removed with a razor saw and an X-Acto knife. Remember to wear a respirator, as resin dust can be hazardous to your health, especially if you decide to do a bunch of these things. There is also a mold line that runs around the figure. Cleaning this up around the fur and hair was fun, but just work slowly and you will get there. If I can do it, anyone can.

Next comes more fun with a figure like this, the painting. (Well, at least, everyone tells me it is the fun part.) Anyway, when I looked at the figure I immediately thought a cat and it appears that Morland has renamed the figure Miss Kitty, though the Lady Furry name is still there.

So, we need some reference material. First, a word of caution – if you are going to search on Google, Furry can bring up some interesting pictures. Maybe that had something to do with the name change. I was trying to think colors and liked the idea of a gray cat, so a search brought up a bunch of cat images, and the ones with blue eyes really struck me, so that was what I based her on. I had used some Vallejo acrylic paints on a couple of my small-scale figures and liked the way they coated, so I took a trip to my LHS and picked up an assortment of grays, blues, and a couple of whites.

I started with the eyes, as the biggest ones I had done so far were either all white or dark slits. I used Deep Sky Blue and added some white to it to make a lighter shade. The pupils and highlights were done last.

The body fur got a coat of dark gray with white patches to match the pictures. Then I used lighter shades of gray to highlight. I also used Black It Out from The Detailer as a dark wash on both the body and the hair (which was shades of Dark Gray and Black).

The dress was done in Royal Blue (a fitting color, I figured), and her shawl was done in Tamiya Park Green left over from the Green Lantern build. I’m not sure the clothing colors work, and someone with a more artistic nature will probably come up with something nicer, but I like it.

Her necklace was first painted black with the jewel done in silver. I then used some Testors Gold enamel on the necklace and some Tamiya Clear Blue on the stone.

A little pink for her tongue, a black outline of her eyes (again, matching my references), and she was done. I thought about using one of the hoop earrings that come in the kit, but thought that would look a little too Gypsy and not portray the image of a Lady that I was going for. It had nothing to do with having to drill a hole or two in the kit at this stage, I swear.

Finding a way to display her actually was the hardest part for me. Again, I had never done a bust, and my search through the local stores did not locate a suitable plinth to mount her on. I posted the question in several forums and was finally put in touch with a guy in California who did small bases, and after a few emails the purchase was done and delivered very quickly.

I picked up some brass tubing at Hobby Lobby and cut a bit to size, then drilled holes in the base and in the figure (this was before I started painting), and once everything was done, I have a fairly decent-looking figure on the shelf.

I would like to thank Morland Studios and IPMS/USA for providing me with this great opportunity to figure it out and tell you about it.

Casting blocks to be removed