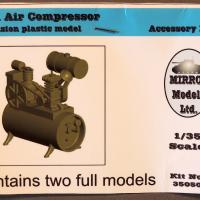 The kit is a 1/35 model of a USA Kellogg Air Compressor used during and after WWII. The kit makes a nicely detailed little accessory for dioramas or vehicles. This kit is from Mirror Models, Ltd. Of Ireland, who produce plastic model kits and accessories.

The compressor kit contains two full models in the package, and comes on two sprues of taupe or a gray/tan plastic. The plastic seems a little soft. Many of the parts are quite small and have very fine detail, such as the pulleys and drive belt, part K15. Some of the parts have fairly large sprue connections that require care removing them from the sprue and need some extra cleanup. The sprue connectors seem large but the actual connection points are fairly thin.

In the first step, take care cleaning the sprue connection points off the two halves of the tank, K2 and K3, as there are raised tabs for locating some of the other parts. I mistakenly sliced them off when cleaning up the connections. I assumed the end of the tank, part K1, should be seamless with the rest of the tank so I filled in the joints with putty.

The kit was painted with LifeColor olive drab, with some weathered highlights. The kit was primed with Alclad gray primer and micro filler. A MIG Dark Wash, and Oil & Grease Stain Mixture were added to the engine parts.

This is a nice little kit with simple assembly and has nice detail. The compressor will be a nice addition to vehicles and dioramas.

Thanks to Stevens International for furnishing the review sample. Thanks as always to the great IPMS review team for the chance to review the kit.