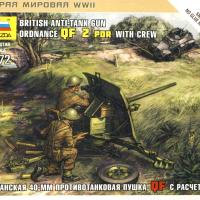 Zvezda has brought out another anti-tank gun for their war-game "Art of Tactic". This time it is the British version used by the BEF during the Battle for France.

The kit contains 22 parts for the gun, 9 parts for the 2 crewmen, a base, and a flag piece for the game, as well as a movement card. The kit has the same snap together construction as the other guns in this series and is made out of some type of softer plastic than regular injection kits, but not as soft as other figures. The plastic can be trimmed with a sharp knife. I did resort to Tamiya liquid glue for some parts to make sure nothing falls off later on. One of the parts for the gun is an optional carriage to display it in travel mode behind a vehicle.

This one was a little harder than the other AT guns I have built from this series, due both to the larger parts count and I had a few issues which I think were more my fault than the kit’s. I had attached the carriage to the base before attaching the gun and couldn’t get it to snap down all the way over the many pins. Unfortunately, once you stick bits to the base, the pins tend to break off if you try to remove them, so I left it as is. I also had trouble trying to get the gunner to sit correctly in his seat and hold the traverse wheel.

I used Tamiya acrylics on the gun and tried some Verlinden paint on the figures. One issue with these kits is the lack of painting instructions. You basically get the box art and that is it. I went online and found a couple of figure painting sites for British infantry that included the Verlinden colors and went from there.

The finished model looks accurate based on photos, and I like having it in the inventory. Will be interesting to see if Zvezda comes out with a North African campaign for their game and maybe rerelease this set with some troops in desert uniforms. Would also love to see it in a Portee version, but since their vehicles for the game are done in 1/100th scale, that probably won’t happen.

I think gamers will enjoy the kit as it isn’t too complicated, and modelers can add a decent gun into your dioramas. Of course, you would need to get a few more figures to round out the crew.