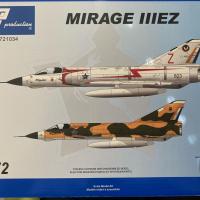 A type well known to anyone with even a casual interest in aviation history, the Dassault Mirage III is one of the classic early supersonic fighter jets. First flown in 1956, it has served in 14 countries and accrued an impressive combat record most notably with the Israeli Air Forces. Another export customer was the South African Air Force. Two examples of the countries Mirages III EZs are represented in this kit. Seventeen examples of the EZ variant were purchased by South Africa and used between 1965 and 1972. They were used during the African Border War but as an interceptor, the radar system was found wanting. These aircraft are all retired from service today.

This is the second build of a Mirage from PJ I’ve done for this site. I previously built a Swiss two seat example and found it a pleasant build. As for this boxing, you get the High Planes plastic parts, resin details from PJ that include vertical stabilizer, ejection seat, instrument panel with coaming and rudder pedals and a control stick. A small photo etch fret has some antennas and a boarding ladder. Clear parts include canopy in two parts, HUD glass and landing lights for nose gear. Decals are provided for two Mirage's from the same Squadron and base in 1969 and 1980. The early version is bare metal and the later has been camouflaged.

Construction is straight forward but because I chose to model the bare metal version, the base finish was going to have to be as smooth as possible. Two issues made that more difficult. The first is the wing top and bottom join lines fall in areas that are difficult to fill without losing most of the details. The second is the replacement resin vertical stabilizer was packed in the bag so small that it deformed it to the right. In spite of my best efforts, I could not get it straight. On the positive side, all the cockpit resin can be dropped in after the airframe is painted.

After a few rounds of filling, sanding and scribing, I finally got the black base (Tamiya gloss black lacquer) painted and polished. Bare metal Mirages always look really polished and that’s what I was after. The first attempt was High Shine Aluminum from Alclad. That wasn’t shinny enough so I buffed it off and reshot with Alclad Chrome. After a clear coat of Testers metallizer sealer, I masked and airbrushed the chromate green panels on the underside. Besides the black radar dome, the rest of the markings are provided on the decal sheet. Speaking of decals, they are a real pleasure to use. Once off the paper and positioned, a dab of Solvaset settled them into the surface perfectly. The landing gear is nicely done. The wheel hubs are nice but the tire tread is very faint. Antennas and data probes are provided as PE parts but I like the profile of the injection parts and used them instead.

This was more work than my first PJ Mirage kit mainly because of the bare metal finish. I enjoyed it just as much even though I didn’t achieve the finish I saw in my mind. I wouldn’t say this is a beginner's kit. The resin parts require some minor surgery to the base plastic but they add detail where it counts. The only other glitch in my sample was the resin seat had a slight twist from top to bottom but in this scale, you have to look really hard to see it. Recommended for those Mirage fans out there or a semi-experienced builder who loves cool early jets.

Thanks to PJ Productions for another great sample product and IPMS for the opportunity to share it with you.