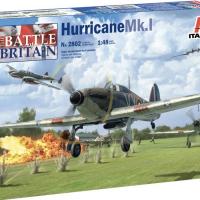 Italeri’s 1/48th Hurricane Mk. I is a reissue and for a great reason, with new Battle of Britain decals to commemorate the 80th anniversary of that event. The kit comes in 89 pieces of well molded gray styrene with minimal to no flash. Also included is a clear sprue of 12 pieces, a photoetch fret of 8 pieces, decal sheet with four options, and a instruction manual. Engraving is very nice and there are several options along the way which I will point out as I build the kit. The four options on the decal sheet are:

Construction, as usual starts with the cockpit and Italeri does a nice job of including the framing around the cockpit. Another nice touch is the inclusion of seat belts in photoetch. A choice at this juncture is which instrument panel setup to use. There are two options. First is just adhering the decal to the flat instrument panel and painting it. Second, and the one I chose is to use the beautiful photoetch panel which had dials and the like in relief and is placed over the decals. A little weathering and dry brushing and this is by far superior to the other method. The remainder of the cockpit build is straightforward. A very nice touch is some stout locating pins for attachment to the fuselage which helps alignment.

Before closing the fuselage, the second choice comes into play. The kit includes a 12-piece engine compartment with the engine and bearers. You need to build it as it does hold the prop shaft and exhausts. There are also open panels to display it. I elected to add it but wanted my panels closed so I didn’t paint it. It is very nicely detailed and I am sure some photoetch or scratch building would make it a real show piece.

When closing the fuselage, cut the molding strap on the left fuselage side, add the engine and cockpit, test fit and repeat. After several tries I got an excellent fit from the cockpit back. I needed little filler on the nose but more about that in a bit.

The wings are next and inserts are included to allow for different variants. The ailerons are positionable also. Flaps are fixed and up. Don’t forget to insert the wheel well. This was joined to the fuselage and only a little putty at the front and rear were needed- none on the wing root. While this was drying, I added the rudder and tails which also have positionable parts.

To finish for painting, there are several oil coolers and radiators that need to be built for the bottom, and a bottom insert front the rear wing to tail wheel. A little sanding and all were fit into place. I built the landing gear, but to ease painting it was left off until later. I flipped back to the top, added the front cowling to cover the engine, which is two pieces that fit Ok. Needed a little putty but not much and they were ready. I added the wing inserts for the guns which also needed a little putty. Lastly, I masked the canopy and installed the windscreen and was ready for paint.

I chose version D as it has the half black/half Sky bottom. The top was dark green/dark earth. Paints were MRP and Xtracolor. After drying and the inevitable touch up, I also elected to paint the sky band at the back. I then glossed the entire kit with Gloss Cote and set aside to dry.

The decals were spectacular (Cartograf!). The fit, settled with water and were just plain awesome. A full set of stencils was also added and there is a separate diagram for them. Once dry, a flat coat was added.

To finish off the kit, the landing gear were added, and oil washes gently added to panel lines along with a small amount of pastel. The exhausts were given a coat of rust and the propeller added. Another coat of flat was added to seal. I added an antenna, the wing tip lights, landing lights, and glued the sliding canopy in place.

This is an excellent kit of the Hurricane and nothing a new modeler can’t tackle even with the little bit of photoetch. Detailers can have a field day further adding to the cockpit and engine. Fit is really good and I can think of no better way to remember the Battle of Britain than to build this historic fighter. Highly recommended to all modelers.

My thanks to Italeri, MRC Academy and IPMS/USA for the chance to build and add this to my collection