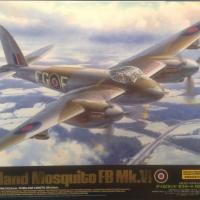 The Mosquito is one of my favorite aircraft with its underdog success story and stunning operational history. Tamiya’s representation of the fighter-bomber version of the Mosquito is superb. Please refer to an earlier IPMS pre-build review of this kit that describes the richness of the kit parts, decals, photo etch materials, instructions and research documents.

The following review details a very enjoyable build of a de Havilland Mosquito FB Mk.IV aircraft. A detailed build log and reference list follows this summary section. The entire build process was almost entirely without problem, extended over a few months with a full-time job competing with my time. The project was an excellent escape and reminder of something this hobby is really good for. I never found myself frustrated and was always absorbed in the kit. Tamiya clearly engineered this kit for trouble-free construction. The kit cross-referenced very well with published materials.

I opted for version A, HX922, the RNZAF aircraft from 487 Squadron, as flown in Operation Jericho. The mission resulted in a POW prison break at Ameins on 18 FEB 44 and is one of the Mosquito’s many epic stories. I also decided to display the aircraft on the ground with the flight deck access hatch open, ladder extended, nose gun compartment and nacelle covers off. While I plan to show off the extraordinary detailing of the engines and guns with everything open (there are magnetic latches to hold the panels in place should I change my mind,) I can’t use the highly detailed aircrew, after all, if the plane is all opened up, the pilot and the navigator would not be in the cockpit. Tamiya provides clear parts to allow the engines to be visible in the nacelles.

I proofed the instructions by proceeding in a linear fashion step-by-step and I found everything to be very straight forward, with the following caveat. My biggest problems had nothing to do with the kit, but were failures to notice part modifications called for in the instructions. I often overlooked the little knife (trim) icon to my detriment, and sometimes I missed drill-out notes. It took some discipline to avoid shooting too far ahead on assemblies, missing version-specific needs, and it also took discipline to cross-check each step for completeness. The part fit is so good that it easy to get carried away and rush on! The sockets, tabs, notches, and so on for joining parts are molded to very tight tolerances with little to no cleanup required. Sprue attachment points are seldom in places where an imperfectly trimmed sprue remnant will affect part fit. I particularly like this because seemingly insignificant or incomplete cleanup errors are much less likely to accumulate or conspire to make bigger, more visible, and difficult to correct errors later. I did need to fill a gap in step 98, but I believe that is because of my fitting errors in an earlier step. I left off many assemblies until after airbrushing to reduce masking and possible damage.

Doing a detailed outline of the instructions might be overkill, but a thorough understanding of the assembly sequence may suggest which large subassemblies could be constructed somewhat independently. At the very least a good review of the instructions will highlight the subtle assembly differences in the 3 versions represented. There are large numbers of unused plastic and photo etch parts, suggesting different kit versions to be released in the future.

A very exciting aspect of the kit is the sheer number of small, highly-detailed parts. Many flaps, panels, engine parts, instruments, ordnance, framework and undercarriage parts are used. One advantage of all the small parts and subassemblies is that separate parts will allow more effective painting of individual components. I painted a great many parts on the sprues. This seemed to speed construction, but post-assembly touch-up was often needed. Listing out parts to be airbrushed on the sprues helped a great deal. I don’t always develop a detailed paint order or schedule for efficient airbrushing, but with this kit, it is worth taking time to do so. The intriguing magnets allow for simple drop-in part attachment, with removable panel display options. The underwing radiator covers work particularly well with the magnet positioning/placement.

A large number of decals are included, representing three markings choices and common stencils for each. I used Modelmaster acrylic gloss coat over Modelmaster acrylic color coats and experienced some silvering using Microscale solutions. I take credit for this problem, and suggest that a hard and thick coat of acrylic floor wax be used as a gloss-coat decal base. Solvaset did resolve many of the silvering issues. The stencils are very crisp. Some very nice features of the large national insignia and aircraft markings are notched and 2-piece decals. Correct decal positioning was quite effective with the notches and pieces, reducing decaling stress on the builder. Excellent stencils are included with the stencil positioning clearly indicated on a separate placement guide. The stencils are all readable under magnification. I am still astonished at the clarity of the air chart decal for the navigator’s chart board.

I can’t recommend this kit highly enough. There is no doubt that sticker shock is a factor with this new release, so I kept that perspective in mind throughout this review. One could buy many kits for $281 certainly, but the documentation, quality of the parts, excellent fit, high-level of detail, and pure build enjoyment make this kit well worth every cent. I am lucky to have built earlier Tamiya kits and this new Mosquito is indeed on a whole new level. This kit is certainly one of my most-fun builds to date.

Thank you again to Tamiya, Inc., and the IPMS Reviewer Corps! I appreciate everything you do for the hobby.

Engine and mounts in nacelles

Front view with panels removed and on ground
Previous Next

Your review of Tamiya 1/32 Mosquito

This is the best review I have ever come across on the web. It sure has helped me a lot in building the model as I have discovered several problems and mistakes I made in working with it. It makes my building a lot more enjoyable now as I go along.