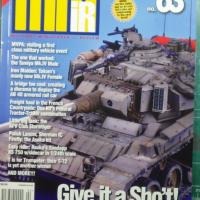 If you’ve never read a copy of Military Miniatures in Review (MMiR), you need to. It’s an 80-page, full color magazine covering armor modeling so maybe if you build just planes, you don’t necessarily need to read it, but you’ll still be missing out. MMiR is printed on heavy glossy paper, with excellent photography, and well-written articles, with just the right amount of humor mixed in to keep it light, while still covering each subject very well.

This issue has ten build articles, which cover each model build, not necessarily step-by-step, but in a way that the reader can follow the build as it’s going together. The authors are careful to point out any issues with the build, and they provide instruction and details of the builds from start to finish, all the way through weathering and how each base was built for the models displayed in a diorama, or vignette.

In addition to the build articles, there is an article detailing a visit to a recent Military Vehicle Presentation Association (MVPA) with plenty of pictures of the well-preserved vehicles on display. There is also a recurring piece called “Mini-Men”, which details several new figures from most of the major scale figure manufacturers. This section shows the figures assembled and primed, so you can really see how well, or in some cases, not so well, the figures will look when they are assembled. I found this section to be very helpful.

This magazine is highly recommended. At a reasonable price, the reader gets a wealth of information in a well-written manner, and surprisingly, without a huge amount of advertisements.

Thanks to the Ampersand Group, and IPMS/USA, for this review copy.