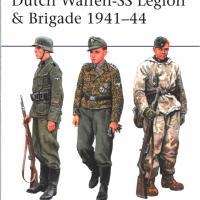 Osprey’s long running men at arms series has produced another volume, this time based on the Dutch Waffen SS. Osprey has a tried and true formula for this series – providing introductory information, battles and campaigns they took part in, and aftermath. These volumes are illustrated with contemporary black and white photographs and color plates of uniforms, flags, and rank insignia. As with most Osprey publications, the production quality is outstanding as are the color plates. The page count is low, which makes sense since the Dutch SS lasted as long as the occupation of Holland and the Second World War.

With the rise of Mussolini in Italy and Hitler in Germany, smaller fascist movements popped up in Western Europe, including Holland. Heinrich Himmler, the commander of the SS for most of the Nazi regime, had a vision of uniting the Nordic races of western Europe into the SS. Regardless how flawed his racial theories were, the Dutch were the first to be recruited for service into the armed wing of the SS – the Waffen SS. Rather than retaining any kind of national identity, they were subsumed into the Waffen SS as the Dutch Legion. While these books are not meant to do a deep dive into units and their campaigns, it would have been nice to see a couple of paragraphs on ideology and what attracted the Dutch into the SS.

Trained in the Balkans, the Legion, then Dutch brigade served entirely on the eastern front, with nearly all of their action in Army Group North. They fought in some of the most vicious battles on the eastern front in the last year of the war, from Estonia to Kurland. The brigade fought well and were loyal to the ideology of the SS and many members were left open to war crimes and losing their citizenship after the war. As with most books in this series, it gives a broad overview of the units highlighted. The SS represented the flaws of the Third Reich, but their crusade against Bolshevism and non-Germanic peoples, they were able to recruit like-minded people around the Third Reich.

With very few exceptions, Osprey publications are outstanding reference books. This is no exception. My thanks to IPMS and Osprey Publications for giving me the opportunity to review this book.