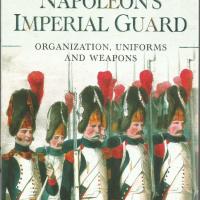 When Napoleon Bonaparte first began his rise to power in France in 1799, there already existed a private armed force dedicated to protecting the person of the King of France. After the French Revolution, this force became known as the Consular Guard, intended to protect French politicians – sort of a personal secret service or bodyguard force on steroids. Private armies of this nature were not at all uncommon in the 1800s, as most aristocratic rulers feared their own subjects more than hostile outside forces. In 1804, with the creation of the French Empire under Napolean’s direct rule, this private army expanded enormously, gleaning only the “best of the best” from the various armed forces of France and its allies and loyal solely to Napolean himself, rather than the nation of France. This force became globally known as the Imperial Guard. Although the best-known portion of this army was called the Old Guard, there also existed a Middle Guard and Young Guard, both composed of soldiers of lesser age and battle experience.

Over time, this supposed personal bodyguard force expanded exponentially, becoming a major armed force in its own right, with its own Cavalry, Artillery and support services. During combat, the Old Guard was usually kept in reserve around the Emperor, only being sent into the fray if things looked dire. When Napolean abdicated and was sent to Elba in exile, 1,000 members of this force went with him, and when he re-took his place as emperor in 1815, these formed the core of his newly-created army, only to go on to suffer ignominious defeat at the famous Battle of Waterloo.

Mr. Esposito’s book takes a deep look at this unique private army, from its origins as the “Maison du Roi” (House of the King) all the way up to Waterloo, with a nice overview of the various subdivisions within each unit. He also covers all the foreign national units, of which there were quite a few – discussing their origins, organization and providing a capsule history of each. Pictures are for the most part from primary sources, and as such vary dramatically in quality and in some cases contradict each other on details. As such, this is a book more for those interested in the history of these units than a resource for replicating the elaborate uniforms, although there are plenty of resources available for the latter. Even with this caveat, this is a highly informative book and certainly filled in a lot of gaps in my own knowledge of this important military unit. It really makes for fascinating reading.

I would heartily recommend this book to anyone interested in the history and development of Napolean’s Imperial Guard. Some of it will surprise you, and you will certainly come away with a better understanding of where this army came from and how it developed into one of the most formidable fighting forces of its day. My thanks to Pen and Sword publishing for releasing this intriguing book and to IPMS/USA for a chance to read and enjoy it. Stay safe, everyone, and happy modeling!