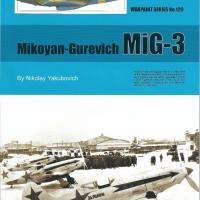 Nikolay Yakubovich is an aviation engineer and aviation historian in Russia. He has written at least seventeen monographs focusing on Russian aircraft since 2001. These include a Russian hardcover monograph on the Tupolev Tu-16, published on January 1, 2001 all the way to 2019’s Guideline Warpaint 124 on the Mikoyan-Gurevich MiG-17. Publishers include Wydawnictwo Militaria, Tseyhgauz, Eksmo Yauza, and of course, Guideline.

Warpaint's latest is their standard A4 format softbound publication that is 68 pages, including 6 pages of 1/72 scale line drawings. I counted 107 clear black and white photographs, 49 color pictures, along with 36 of Andrey Yurgenson’s color side profiles and two sets of color four-views. Andrey Yurgenson also contributes six pages that features 30 complete line drawings, 3 black and white scrap drawings, all in 1/72 scale.

The front cover features an Andrey Yurgenson color side profile of a Rumanian MiG-3 that was captured in 1941. This was the second MiG-3 captured by Escadrila 19. The Russian colors were overpainted with Rumanian camouflage. AAR ace, Captain Constantin ‘Bazu’ Cantacuzino, flew this MiG-3 to Brasov, where it was used as an ‘aggressor’ for training purposes. Under a Russian-Romanian cease fire agreement, all captured Russian aircraft were returned by Rumania to Russia. The black and white photograph at the bottom depicts the handover of MiG-3s to the 172nd Fighter Air Regiment

The back cover features two color photographs of one of three MiG-3s that were rebuilt/restored by Aviarestorations and is on display at the Russia Air Force 100th Anniversary Airshow in Zhukovsky, Russia, in August 2012.

Nikolay Yakubovich kicks off this tome with the development of the MiG-3 from the prototype I-200 fighter design in 1939. The primary competition was the Polikarpov I-185, however, Antyom Mikoyan had a political advantage; his older brother, Anastas Mikoyan, was a member of the Politburo of the Central Committee of the All-Union Communist Party of Bolsheviks. Along with Antyom’s first deputy, Mikhail Gurevich, Mikoyan was pulled from Polikarpov and set up as their own experimental design bureau when Stalin became disenchanted with Nikolai Polikarpov. Composed of non-strategic materials, the I-200 first flew on April 5, 1940. At that time the only fighter that was faster was the Heinkel He 100, and the I-200 did that without the engine designed for it, the AM-37, which would add 200 hp over the AM-35 that was available. Indeed, as additional prototypes would be tested, this design would be designated the MiG-1 and it was faster than both its contemporaries, the Bf 109F and Spitfire Mk Vb. The MiG-1 was designed to intercept bombers at high altitude (30,000 feet) and could out-climb, and was unmatched at altitude, however, the majority of the air war between Germany and Russia was fought close to the ground where the MiG’s advantages were far less. The Mig-3 production also suffered severe quality issues, ending up with the head of the factory being executed.

Nikolay Yakubovich covers all of the variants, up to the MiG-9, along with the prototype aircraft up to I-231. Up next is coverage of the MiG operational use and air combat, followed by a technical description. Included are two contemporary evaluations of the MiG-3 that were quite interesting. The technical description chapter includes fourteen photographs from an operation manual that depict the airframe internals, landing gear, and cockpit. The chapters on Camouflage and Markings and In Detail both use color photographs of the three new build (restored/replicas) and museum replicas. The final chapter discusses available model kits, accessories, and decals that are available.

I found a lot of interesting sections, but the one that fascinated me was the contemporary evaluations of the MiG-3 in “An Overall Assessment”. One of several evaluations was by pilot D. Kurdyumov who noted that the MiG-3 “was heavy to fly, slow to climb, and in addition, had a very large turn radius, which dispirited us significantly as we were used to the nimble ‘swallows’, the I-16s.” This assessment is probably not surprising as the MiG-3 was designed to fight at high altitudes. Bringing the MiG-3 to the deck as a fighter bomber eliminated most of its advantages.

I was able to read this monograph over four days on a road trip. The text is well supplemented with very clear photographs and captions. Andrey Yurgenson provides the color side profiles and the 1/72 line drawings. This is an excellent reference on the MiG-1 / MiG-3 series and would be a valuable addition to your reference library. Whether you are building the 1/72. 1/48 or 1/32 kits, I would consider this edition essential as an aide to your build. There are also no shortage of decals, photo-etch, and resin bits to detail your kit. Unfortunately, there appear to be no currently available kits of some of the other variants, i.e.: the MiG-1, MiG-3, or the radial powered MiG-9. If you own any of the previous releases in the Warpaint series, you know what you are getting. If this is your initial entry into this series, you will be quite pleased.