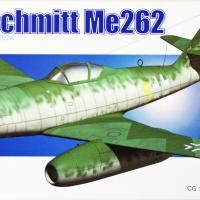 Fujimi has issued a Me-262 A-1A in 1/144 scale. I have built all the other scales from 1/72 to 1/32 and when this came up for review, I couldn’t resist. He kit comes with two gray sprues holding 21 parts and a small clear sprue with two canopies. A nice decal sheet with markings for one plane, a Me-262 A-1a Yellow 5 from 9/KG(J) 6 in April 1945. The instructions are on the back of the box along with a paint scheme and color references. The colors are wrong in a couple cases as the plane should be RLM76 on the bottom and RLM 81/82 on top with lots of mottling down the sides.

The kit is fairly simple with the fuselage being two halves and the wing being a solid one piece. The engines are four pieces- front and back and two sides. They are handed to fit the angle of the wings. Fit is not good with the engines to the wings and putty was used. The flaps/ailerons are represented by engraved lines. There is no interior represented in the kit. The tail parts were added without any fuss and the entire kit sanded. The only options with the kit are the main landing gear which can be posed up or down. The front landing gear is posed down. I wanted my plane to sit on its gear so I decided to add it later- which you’ll see is a problem.

At this point, the plane was ready to paint and I sprayed almost the entire plane RLM 76. I then cut a small mask and sprayed the fuselage RLM81 along with the top of the wings and the horizontal stabs. Another quick mask and RLM 82 was shot in the pattern shown by the instructions. Masks were removed the mottling was down with the RLM81/82 and a small brush. Couple touch ups were needed but it came out looking decent. I added the main gear and it was a huge tail sitter…. Nothing in the instructions mentioned the need for weight. To fix it, I drilled a hole in the cockpit and fed lead weight thinned to a small diameter into the nose with pliers. Several iteration later, the weigh issue was gone. I patched the hole and [painted the cockpit RLM66 and it was good to go. The landing gear was painted along with the wheel wells and the entire thing given a gloss coat.

The decals went on well and swastikas were included in two parts which is nice. They snuggled down with minimal encouragement. I flat coated the kit and turned my attention to the canopy. The framing was minimal so I referenced a 1/48 scale kit and painted them on. The canopy was added to the kit and its finished.

This was a fun little project- the kit looks like an Me262 with the only thing off being that the canopy is a bit flat looking but that could be a molding issue or just my eye. You can see buy the comparison pictures how tiny it is next to its 1/48 scale counterpart.