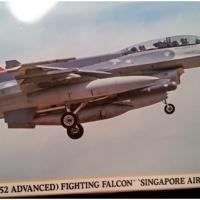 In 1993, the 425th Fighter Squadron was reactivated to provide Singapore’s F-16 pilots with the latest weapons and tactical training. For the 20th anniversary of the training, certain Singapore Air Force F-16Ds were painted for the occasion.

There are roughly 140 parts in the kit, however some of them aren’t used, as they are spares for the different block version. The kit also comes with the additional spline sprue so the original tail isn’t used. There are 18 total sprues, one of which is clear, and the decals allow you to make two different tail numbers. Unfortunately you’re not given all the pieces to make it look like the box art so I deviated from the instructions a little. The only molding issue I saw was with the cockpit glass also had a line down the middle from the molding.

As I’m sure most people know this is just a re-box of the typical Hasegawa F-16D kit, however for me this is my first time ever building a Hasegawa F-16. So from my point of view this kit was really more about the decals than the pieces, as my research shows the F-16D model has not changed much over the last few years. The only real difference for this kit as opposed to some others is that it has the spline sprue. While the kit itself is very nice and there is a lot of detail on the pieces, the panel lines and detailing isn’t very deep.

The assembly begins with the cockpit. I have never been a fan of putting figures into my planes so I didn’t for this one. If you do put them in the instructions advise you not to use adhesive. The two seats are very typical. They came off a little big to me, in comparison to some pictures I found online. It seems as though they may not be positioned at the proper angle. Pilot and weapon’s officer’s positions have raised instruments and displays.

The fuselage is molded into a top and bottom halves. I didn’t have a ton of trouble patching these up. Per usual you will need some putty to get rid of the gaps, but they weren’t bad for me and came together fairly easily. I also chose not to have the air brakes shown, as it would require cutting off the pieces that were already molded on. You can put them in the closed or open position. I had never done that before and didn’t feel like messing it up. Had I known I would need to cut off the wing tip pylons I probably would have done it.

The next step is building together the exhaust and nozzle, which went together pretty well but required a good amount of sanding when installed in the fuselage. Combining the top and bottom part of the wings is next and they’re my least favorite kind of wing. The fit puzzle piece style wing - you have to place one inside the other instead of them mating at the ends. However I really liked this kit’s version of the wings as they fit together really nicely and they placed the cutout in a good location. I didn’t do anything to modify them. They do require cutting off the pylons on the end and replace them with another set. After some sanding these other pylons fit pretty flush with the wing.

The next step is attaching the engine, rudders and wings to the fuselage. Unfortunately for me I snapped off one of the rudders at this step and had a heck of a time putting it back on. I did have to use putty to get rid of the seams for the wings and, like I said earlier, I had to sand the nozzle to the fuselage heavily.

Next is the spine and tail, and again I didn’t have any issues with the tail even though it uses the “puzzle” type of fit. The few issues that I found were that the spine didn’t sit properly on the fuselage body so I had to use a lot of putty, and even then I wasn’t able to get a good fit. The tail itself didn’t sit properly either. The end of it butted up onto the engine so I had to trim it down until it looked flush, however I didn’t notice at the time it put the tail on an angle. That or I just didn’t notice I glued it on an angle. You are required to cut off little molded pieces on each side of the spline and add another piece to the tail. I didn’t have any issues doing this.

The intake is next. I had an issue with this as well, and it’s broken up into 4 pieces. I had an issue getting it to fit properly even with putty so that area is a little rough on my kit. The nose cone requires 1g of weight as well. I found this to fit fairly flush with little sanding required.

Following this was the most difficult to me, the landing gear. It was hard to depict exactly where certain pieces of the landing gear should be glued. I ended up breaking off the same piece on each side at least once. One side I had to replace the piece from another kit. The landing doors for all the landing gear went together really well though and I had no issues with them.

Following this is the canopy glass. Because I’m not real expert I try to do something different with every model I build. This model it was the cockpit glass where I used Future. I typically save this as the final step after I’ve finished everything. This time I put the cockpit glass on before any finishes trying to get a better fit, and I must say I’m pretty happy with it. It sits a lot more flush then I would have thought. I always install my canopies closed as well, never being a fan of leaving them open. The kit does give you the option for an open canopy with ladders to put in the cockpit.

The final step is the armament; there are 2 - 370 gallon fuel tanks and 1 - 300 gallon fuel tank, along with the option for AIM-120’s and AIM-9L/M’s. There is no sniper pod as seen on the box art. I used the AIM-9 and didn’t bother with the AIM-120s. I placed these on the underside of the wing as opposed to placing them on the wing tips. This follows the instructions, even though it may not look the best.

Now for painting. Like most F-16’s the pain scheme uses 4 paints, all Model Master - Gunship Gray, Neutral Gray, Dark Ghost Gray and Light Ghost Gray. I typically leave off anything I can when I paint the body of the fuselage; I don’t like to use that much tape. I think the colors came out really well. The steel used on the engine looked a little off to me so I mixed some flat black with steel and was able to come up with a darker steel-looking color that I used. The underside was entirely light ghost gray which made it easy to paint. Because I left certain things off till the end the gun didn’t sit as flush as it normally would. Just a small misstep that next time that I would be able to correct. In this case my method did not work well.

Now on to the real purpose of this new kit, the decals. I had a few issues with the big tail decals but in the finished product you can’t tell that I ripped them during placing. I don’t think it was a decal mishap just a placement error that got stuck and when I tried to fix it I ripped it. You’ll also notice I’m using the wrong tail number. That was because I again erroneously placed the tail number on an angle and had to swap it out with the other model’s number. Luckily I did this to the first one so it was an easy swap. All the decals sit flush with the model which I was really happy with. I didn’t see any mis-numbering but I did see a handful of decals left over with nowhere to place them. I want to believe they were omitted for a reason. I didn’t have any issues with silvering or anything of that nature either. I used MicroSet and MicroSol on all my decals.

In the end it looks like with just some novice modeling skills you can make this kit into something really nice. I would love to see what a great modeler could do to this kit. Overall the kit fits really well and I didn’t have too much trouble with the instructions besides the landing gear issue.

Thanks to Hasegawa, and IPMS/USA for providing this copy and the opportunity to take a look at their model of this nicely designed kit.