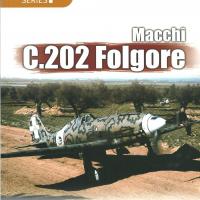 MMP Books continues its Orange Series, this time with the 3rd Edition of the “Macchi C.202 Folgore” book by Przemysław Skulski.

The C.202 Folgore was probably the most significant aircraft of Italian design during WW2, given that is was one of the best performers of the bunch -maybe not the best, but among the best- and certainly the one produced in the larger numbers among those airframes competing for the “best of” title of Italian design.

The book describes the XVI series (or “Marks”) of this airframe, although some of the series were similar to each other, it only referred to which company manufactured the airplane. Some series were not built due to the armistice or other issues, meaning that only about 1200 airframes were ever completed.

The book the describes (briefly) the operative service in different fronts, like Malta, North Africa, Defense of Italy, the expeditionary force to the Soviet Union, or even lesser-known fronts like combat operations after the armistice, in Luftwaffe service, Croatian service or even the Swiss attempt to purchase some airframes. All these combat actions are not in deep detail, just enough to understand how the airplane was used and at times there are some details on a specific pilot or combat engagement.

The real “meat” of this book are the period (B&W) pictures of the Folgore, together with the work-around pictures of the only 2 survivors, plus some detailed drawings which seem to be from technical manuals.

Finally there are 58 color profiles of different airplanes, including a table with the matching FS standard number of many of the Regia Aeronautica paint colors.

If you are interested into the Macchi C.202 Folgore, this book won’t disappoint you. It has everything you want to know about this particular airframe, it is extremely well researched and the color pictures got me pulling my own “202s” from the stash thinking that I should build one… or maybe two of them.

This book is highly recommended to historians, modelers and aviation aficionados.

I would like to thank Casemate Publishers, MMP Books and IPMS/USA for the review sample.