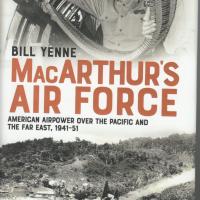 The subtitle of this book is “American Airpower over the Pacific and the Far East, 1941–51”. But it covers much more than this.

This excellent book follows Douglas MacArthur from his education at West Point through his retirement. I really enjoyed some of the “side stories”, such as the fact that Arthur MacArthur, Douglas’ father was friends with Congressman John Mitchell. When Arthur was deployed, Mrs. MacArthur stayed in Milwaukee, where the Mitchells also lived. Douglas was friends with the son Bill, who was later famous as Billy Mitchell, the airpower advocate. The two served together on the Army General Staff. And Douglas MacArthur was on the board of Mitchell’s court martial.

The book doesn’t just follow MacArthur’s career, but also the development of air power in the US Army, also noting the lack of interest in air by higher commands. It also shows how the people who worked for MacArthur in the Southwest Pacific fought and won the war. MacArthur may have been in charge, but the pilots, crew members, maintenance people, administrators, cooks, supply people, and all those other jobs made victory possible.

One reason I was interested in this book is that my father served in the 5th Air Force from 1943 to 1945. He was stationed on New Guinea, Biak, Owi, Baguio in the Philippines, and into Japan at the end of the war. He was a driver and mechanic in an Air Corps vehicle maintenance and transportation unit.

The contents of the book are in the following chapters.

This is one of those history books that goes beyond the basic facts and gives insight into the thinking and reasons for why certain things were done. There are sections which show the missions as they were flown and how new strategies and tactics were brought in to make them more effective.

Another area was the ongoing fight between MacArthur and the Pentagon over equipment and personnel. The successes in New Guinea were reached through strategic planning and creative thinking rather than firepower or fortifications. As the ground troops became more plentiful and supplies were less scarce, the Air Corps also was getting better equipment. One of the innovations on the northern coast was bypassing a large Japanese force and airlifting troops to a location where they could cut off the supply lines to the Japanese Army troops.

Highly recommended. I really enjoyed this book. It’s not just a history, it’s a story of the leaders and people of the 5th Air Force. And as a story, it brings the human side of the history as well as the technology and dates. Dick Bong is featured in 13 different places in the book, from his first combat flight to his eventual death in a P-80.

Many thanks to Osprey Publications for this outstanding book, and to IPMS USA for allowing me to review it.

Macarthur and His C-54