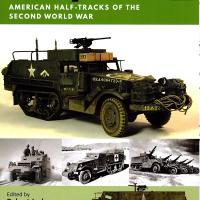 This is one of three books in Pen & Swords Land Craft series. The other books include The Jeep and Bren Gun Carrier. The Land Craft books are good resources for modelers as they provide background on the design of vehicles, detailed descriptions, and description of variants. They also include a gallery of completed models and kits available.

Provides a brief description of the history of half-track vehicles subsequent to World War I, including early French vehicles and the half-track car T1. These early vehicles were tested for use as prime movers.

Black and white photographs are used to illustrate exterior and interior details of the M2/M3. This chapter also describes communication methods used by armored infantry battalions, and further describes differences in the manufacturer’s different versions.

In Service and In Action

The book is a nice reference for modelers as it includes good descriptions of the vehicles, many illustrative photographs, and inspiration through the color profiles and completed models. The text is fairly brief on the topics covered but there are lots of clear black-and-white photographs and color profiles. This is a great reference for modelers of half-track vehicles.

Thanks to Pen & Sword for providing the review sample of the book and to the IPMS review program.