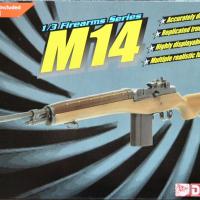 This is an interesting little kit of a subject that, while something that I've always been interested in, has never before held much modeling interest to me. Maybe this was due to the lack of decent kits in the past, as I missed the boat on the old 1/1 scale pistol kits that were available many years ago and since then the only other firearm kits that I recall seeing were the 1/4 scale items from Verlinden back in the early ‘90s or so. These were resin kits that were OK, but not really for the casual builder. Dragon's kit of the M14, however, is a kit that a relative beginner can successfully build. I spent the equivalent of a long afternoon on this kit, spread out over a weekend. A nice, simple, quick build.

What you get in the box are 40 parts molded in black plastic (3 of which aren't really needed, more on this later) and 3 metal springs. Two of these are for the trigger and magazine release lever, the other is the main recoil spring for the action. Aside from the forward 1/3 of the barrel and the magazine box, the parts are pretty much broken down along the lines of the components of the real rifle, albeit simplified in a couple of places: There isn't a proper bolt include, and the trigger and safety lever don't attach to anything inside. The lack of a bolt is hidden by the sliding bolt cover, so it doesn't appear to be an issue. Everything fit together nicely, the only seam cleanup I needed to do was where the forward barrel and gas tube parts joined together. A little file work and sanding took care of this; no putty was required. The black plastic components were left unpainted, except for a final coat of clear flat to cover a few small glue marks and even out the finish on the places that I sanded sprue attachments or mold marks away. The stock came pre-painted in a wood brown color, so aside from the clear flat, the only painting that I needed to do was to paint the upper hand guard a red-brown color and 2 of the supplied cartridges brass with copper bullets. The hand guard color was called out as a Gunze Aqueous paint code, but not having access to that line anymore I mixed some old Pactra Acrylic dark tan and hull red to get a suitable red-brown shade for the hand guard. The brass and copper were Testors enamel paints. I just did a quick, out of the box build, but there's room to improve the OOB finish if one so chooses, adding wear to the metal surfaces and wood grain detail/texture to the stock.

There are a couple of other things to note. First, the butt plate assembly is a wee bit smaller than the butt end of the stock, resulting in a slight step. Second, the instructions have parts B20 and B2 misidentified. There are 4 cartridges provided, but the magazine box will only accept 2. The other 2 can be displayed with the rifle if desired. The other extra part that I mentioned is a second B21. I'm not 100% positive, but I think B21 is the bolt release lever. It resides on the left side of the receiver; only 1 is required to build the rifle.

When completed, the Dragon M14 looks very much the part of the service rifle. The kit is designed that the magazine is removable, the bolt/action opens and closes, the trigger and safety lever move, and the moveable butt plate functions. I wouldn't recommend racking the action and letting the bolt slam home (so to speak), but overall this kit was a lot of fun to build. As I'm highly unlikely to ever own a real M14, this is one way to indulge my interesting firearms a bit. I would have liked to see a few things included that weren't. Notably, a bayonet would have been interesting, and a couple strips of vinyl with holes punched in and some photoetched hardware to make a sling would have also been nice to have. But overall I really enjoyed this build, and would recommend it to just about anyone who is interested in firearms, or even a pleasant diversion from their normal modeling areas.

Thanks to Dragon USA for the review sample; I know I'll be keeping an eye out for some more releases in this line!