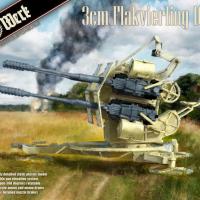 The kit’s guns are described as “The Mk 103/38 was a late-war, four-gun installation of the Mk 103 3cm gun from Rheinmetall Borsig. The Mk 103 was an electrically fired, recoil and gas-operated automatic cannon designed to be used as a dual-purpose weapon against air and ground targets.

The experimental Mk 103/38 four-gun installation proved troublesome dur to (the) fact that the mount was originally designed for the smaller 2cm Flak 38, and heavy vibration took its toll on both the equipment and the crew aiming the weapon.”

This kit provides a gun mount which can be rotated 360˚ and the gun elevation is capable of linking with the gun sight. The kit contains approximately 106 molded parts on 2 sprue trees, and a decal sheet. This is a simple, yet satisfying, quick and easy build, which is almost a novelty in the modeling world (with numerous kits marketed with several thousand pieces).

I am impressed with most of the surface detail, including the raised details, rivets, etc. The instructions are also clearly printed in color to further delineate the parts and their relationship.

The instruction sheet 15 pages with 14 steps needed to complete the build, painting and decals. A variety of model paints are called out in the instructions, providing an English common name, the RAL (Reichs-Außhuss für Lieferbedingungen) number and six paint manufacturers (Tamiya, Mr Hobby, Ammo by Mig, Vallejo, Humbrol and Mission Models).

Construction required only a minimal amount of sanding and clean-up. I chose to use the AK Real Colors acrylic lacquer paints and briefly experimented while using Vallejo surface primer on the base and then no primer with the Real Color acrylic lacquer (which is a new product for me, and I am rapidly become a fan of); the result of my highly unscientific experiment impressed me and leads me to believe these acrylic lacquer paints do not need to be primed first (saving an entire preliminary step required with the acrylic paints).

There are a few hints as to where one might allow this flak gun moveable, though I glued the kit in a ‘fixed’ configuration and displayed it in a slightly raised position.

As mentioned above, I used Vallejo Desert Sand Surface Primer #70.613 for most of the surface areas on the model base prior to learning that this was not necessary. My choice of the four-color schemes was one from an unidentified unit in the Ardennes, from September 1945. This required only two colors: the overall Dunkelgelb RAL 7028 (AK Real Color #RC 060) and Schokoladenbraun RAL 8017 (AK Real Color #RC 068) for the small amount of camouflage.

I painted the overall guns in flat black (Mission Models MMP-047), with the barrel flash suppressors in gun metal (Mission Models MMM-010), and silver (Mission Models MMC-001). Following the painting, I applied a small amount of burnt umber oil wash to pick out some of the raised surface details and rivets and dry-brushed gun receiver areas with AK True Metal steel (AK 457).

There is a small sheet of decals of which I only used two small decals for the flak gun mount. There are a variety of small decals to complete which ever paint scheme you choose, including several artillery insignias.

This kit provided a great break in the long line of more challenging aircraft and armor kits I normally find myself bogged down with. This kit was truly a pleasure to complete. It well engineered, the instructions thoughtfully laid-out and should not prove a difficult build for a wide range of modelers, from the beginners to the more experienced. It builds up as a very interesting and unique vehicle in my collection of German WW II flak and artillery pieces. Kudos to Das Werk, which has in my opinion, continued to build some of the more obscure and less built kits, and I applaud their efforts on our behalf.

I am most appreciative for the opportunity to build this kit and want to thank MBK-USA and Das Werk Model company.