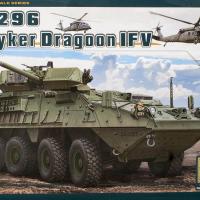 The Stryker has been in service with the US military nigh on fifteen years and up until now, it was at best simply able to provide defense against enemy infantry with its .50 caliber machine gun. In its newest iteration, the M1296 Stryker Dragoon IFV, it has been upgunned to a 30mm version of the 25mm Bushmaster gun used in the Bradley vehicles. While no match for heavy armor, it is capable of keeping enemy APCs occupied so the main battle tanks can duel unhindered.

Panda Hobby’s recent release of this newly revised version of the Stryker proves to be a decent mix of beautiful fit with some over-engineered assemblies to make one feel challenged during the build. Match that with an occasional error in the instructions and you’ll feel the need for care and patience, but you will be rewarded with a very nice build in the end with your perseverance.

There are five sprues of tan plastic, an upper and lower hull section, a clear sprue, a PE fret, and eight hard vinyl (styrene?) tires in addition to the decal sheet. Detail is quite crisp and there are just hints of flash here and there. The plastic is a tad soft and can lead to issues if you’re not careful with your sprue cutters.

Assembly begins with the undercarriage assembly- including drive shafts and suspensions. On the first page, there is an instance on the very bottom where a part number was cut off so you’ll need to take some time to decipher what the part is. Attaching the lower front armor plate is a bit tricky as the locator pins are very slight and not easily used to locate the right position. Some of the PE is used to cover the suspensions- bending was easy and they look great.

The rear side of the lower hull attaches next and fit was great. This is followed by assembly of the hubs and fitting them to the tires and then onto the lower hull. I left the tires off until the end to make painting the model easier. Whatever you decide to do, be forewarned that the styrene or vinyl is very stiff and it is not at all easy to fit the hubs into them. Part of the problem was that despite the fact the 8 tires came loose in a separate baggy, each had a cross-shaped ejection pin attached to their centers at four attachment points. Removing these proved challenging...and in my case- despite my care in cleaning up that area, I had a bit of trouble getting the hubs in past these areas. It was frustrating and not a fond memory for me.

After adding the rest of the detail to the rear side, including the jerry cans, we move on to the upper hull. Adding extra armor plating, hatches, and toolboxes takes up the next eight steps. It is involved but one can appreciate the added detail in the end. In the front, two PE grills are to be bent and placed over the exhaust areas. A jig of sorts similar to what Takom and Meng have been offering as of late would be welcome here as there’s not much to go by as to how far one would bend them in a bending tool otherwise. There are some areas of the instructions where part numbers on stickers appear to have been placed as corrections to the sheet. Unfortunately on page 12 at the top left, the part labeled D70 is indicated as going on the left side of the front hatch, but it is mislabeled. It should go in the center and the other part, D71, should take its place. Upper and lower hulls come together with no issues. Fiddly bits for the upper hull continue here and then we come to the second frustrating part of the build-- the assembly of the front lights. A five part assembly with no real defining attachment points-- and no real idea of how things are to be oriented based on the instructions. It would have been nice to either have a few less parts, or possibly a bit better direction in how to get things looking like they should. Assembly of the main body concludes with the side and rear tool racks and gun travel lock.

The turret and 30mm cannon complete the assembly. The assembly of the cannon and machine gun were straightforward. The infrared sight was tricky and it’s installation into the front of the hatch gave me a bit of the fits. The smoke grenade launcher assemblies need patience and care-- there is a mislabeling of part D4 as it is on the wrong side...take your time and you’ll pick up on it. There’s a delicate PE piece to fold for the ammo feed belt for the cannon...but mine popped off into oblivion on the way to the photo booth. One last PE piece and cover for over the infrared sight completes the build. There is only one paint scheme to be done- 2nd CAV in Germany and it calls for “light green”. I did a bit of research though and found the best match for the Stryker scheme was Model Master Acryl Marine Corps Green. Weathering was done with Ammo by Mig pigments and washes.

The kit was definitely more challenging than I think it really needed to be, but I feel Panda Hobby has done a great job recreating the classic Stryker profile. It’s a struggle, but you are rewarded with a nice looking model in the end. I highly recommend this to more experienced modelers with an interest in modern armor. My thanks to Panda Hobby and IPMS/USA for the review sample.