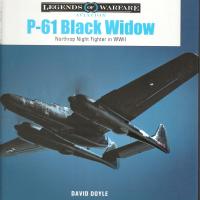 David Doyle is well known to historians and modelers alike, with over 200 books to his credit. His Legends of Warfare series covers many of the important machines used in warfare. This latest volume is for the Northrup P-61 Black Widow. The P-61 was the first US purpose designed night fighter. Comparison in size to a medium bomber and with its twin-boom design the P-61 was a very distinctive design and popular with aviation enthusiasts and modelers alike. Monogram Models often said it was their very best selling 1/48 scale model. Hopefully soon the Mid-Atlantic Air Museum will have their P-61 back in the air.

Each chapter has brief coverage of the model within, but the true treasure of this book are the many photos contained within. Photos of wooden mock-ups, production lines, cockpit and details, test aircraft, in service aircraft as well as museum preserved aircraft.

The reader is provided with a visual feast on the P-61. I can heartily recommend this book to all with an interest in the P-61 whether casual reader, historian, or modeler. All will like this!