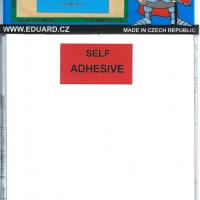 My thanks to Eduard for furnishing this photo-etch set for review and IPMS for allowing me to do it.

The Avro Lancaster was arguably the RAF’s most famous bomber of the Second World War. Most of its fame was gained as a night bomber. Of the 7,377 Lancasters built, 3,039 were B.Mk.III bombers with Packard built Merlin engines. Nineteen of the Mk.IIIs were specially modified to use the Barnes Wallis-designed "bouncing bomb" and assigned to No. 617 Squadron. That squadron with its modified Lancaster bombers conducted one of the war’s most famous raids – the night attack on four Ruhr Valley dams trying to cripple Germany’s industry in the region.

Commemorating that most famous Lancaster raid, Airfix released a retooled 1/72 version of their Lancaster called the Avro Lancaster B.III The Dambuster. Following closely behind, Eduard released their photoetch interior detail set (73484) containing approximately 115 pieces on two frets – one with self-adhesive backing. See them pictured below. The main emphasis of this detail set is to enhance the looks and accuracy of the cockpit and forward fuselage which can be easily seen through the “greenhouse” canopy. The detail on these parts is outstanding.

It must be pointed out that this photoetch set is much more suited for the experienced “photo-etcher” due to the small size of some parts and the intricate bending required on others. This set is not for the novice builder and may not be suitable for some of us average builders.

Unfolding the instruction sheet revels clear diagrams with both kit parts and set parts plainly identified. See example below. There is even a page instructing the builder how to handle the parts with self-adhesive backing. For some parts I would like to have seen some intermediate bending steps included. Case in point is the pilot’s seat with its multiple bends and folds as exemplified in the picture below. As with the exterior detail set for this kit (72564), the legend indicating material removal, photoetch parts, and fill are done in gray-scale printing. A clearer set of instructions would be the color-coded instructions as found on Eduard’s web site https://www.eduard.com/out/media/73484.pdf.

There are several areas that require the modeler to remove material from the kit parts before the photoetch parts can be placed. Examples are: throttle quadrant, control wheel, molded junction boxes and panels, and some seats. In fact, the kit’s pilot seat is not used at all. The photoetch pilot’s seat is made of 17 separate parts that must be folded and bent into shape. Besides the pilot’s seat, there are six other seats of various descriptions that are replaced by or supplemented with photo-etched parts. The highlight of this set is the phenomenal painted detail found on the various instrument panels throughout the cockpit. See a detailed picture below. Besides the instrument panels, Eduard has pre-painted the flooring with a nice wood-tone finish.

In summary, the crisp detail and beautifully painted instrument panels of this photo-etch set will greatly enhance the looks of the cockpit area. An experienced modeler with plenty of photoetch experience can readily take the Lancaster model to the next level. While the packaging lists this set for the Lancaster B MkIII Dambuster, I suspect this photoetch set can be easily adapted to any of the various Airfix 1/72 Lancaster kits. No other product on the market will do as much for improving the looks of the Lancaster as this photoetch set. It is highly recommended.

Again, I want to thank Eduard for the review sample and thank IPMS/USA for allowing me to make the review.