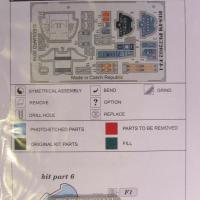 If you are looking to improve the appearance of your 1/72 scale FJ-1 Fury, I would direct your attention to this photo-etched set from Resin Improvements. Although recommended for the VALOM kit, I was able to use the set effectively with the release from SIGA with only some minor plastic and metal removal. Most of the cockpit parts are pre-painted, which makes them both quick and easy to use right out of the package. A modeler with some experience using photo-etched parts should not have any issues with utilizing this set.

One of the newer companies that the IPMS-USA has picked up for Review Corps items is Resin Improvements from the Czech Republic. Although I had not previously heard of the company, their web site shows a 2011 date on it. I also noted when the set arrived that the photo etch fret has “© Eduard 2014” engraved on one end. In addition, the instructions are identical to those found in Eduard photo etch detail sets.

According to my instruction sheet, the SIGA kit was released in 2000, and it did come supplied with a small, brass photo-etched parts fret; but use of those parts is neither shown nor described in the directions. The thirty parts of this set consist of pre-painted control panel gauges and bezels, seat belts and harness, as well as side panels for the cockpit. The seat and cockpit rear wall, along with parts to spruce up the landing gear are not painted.

In order to use this set with my SIGA kit, I needed to clean excess plastic from the kit’s control panel sides, as the RES-IM parts are installed on top of this item. I also needed to trim and file a small amount off of the sides of the rear wall photo etch part, as it did not match the interior contour of the kit. The top panels for the cockpit were a little long for the kit cockpit part that they are installed on, so I had to trim the panels some in order to get the rear wall to fit correctly. My reference photographs show that the FJ-1 Fury had a black cockpit, so I used Model Master Acryl “Aircraft Interior Black” to paint any items requiring that color, including the seat (once formed) and rear wall from this set.

As far as my hits are concerned, the photo etch metal, being from Eduard, is very well made, and the pre-painted items make installation quick. The set is an improvement over the photo-etched items that came with my kit, but technology has also improved in the fifteen years since it was released. Anyone with some experience with photo-etched parts or small detail parts should have no issues with adding this set to their FJ-1 Fury. In addition, I did not have any misses to mention for this particular set.

In conclusion, I would highly recommend this photo-etched set to anyone looking to improve the front office of his or her 1/72 scale FJ-1 Fury, whether it is the VALOM or the SIGA release. The set is reasonably easy to use with only the bending of the seat and harness requiring some patience to complete. The pre-painted items make for quick additions that only require the use of your cyanoacrylate adhesive of choice.

I would like to thank the folks at Resin Improvements for providing this set to the IPMS-USA for review, as well as to Dave Morrissette who runs the Review Corps for allowing me the opportunity to put the set to use. I always like to recognize the folks who help behind the scenes with the Review Corps for their efforts, and finally, my most sincere appreciation to all who take the time to read my comments.

Seat - Back
Previous Next