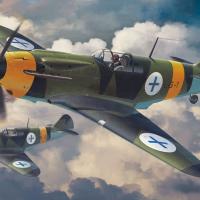 Hasegawa has been re-boxing some kits from different manufactures lately and that is not a bad thing at all. That way you get a chance to acquire a kit that otherwise would be out of production or be difficult to find.

This boxing of Hasegawa is actually a re-box of the ICM Lagg-3. Down to the point that the packing bags are of the resalable kind (ICM standard) and there is even a sticker in the bag that says “Made in Ukraine”.

The Finnish Air Force during War World Two was perhaps the most eclectic Air Force of them all. They not only pressed into service any airframe they could get their hands on, they also had airplanes from almost any country in their inventory: American, British, Italian, German, French, and even Russian!

This kit is typical of ICM, with a little bit of a pebble texture in their plastic and low part count.

First of all you have to choose the decal version you want; if LG-1 (early version) or LG-3 (late version) as the instruction calls for different cowlings and modifications to the rudder based on the chosen decal option.

I choose LG-3, however, after I was almost done with the model I got some references and I found out that the instructions are wrong and the late Lagg-3 version cannot be completed with the parts on the box. It requires the wings to have slats, a different pitot tube (which is included) and a different rudder. By the time I found out it was too late to make those modifications. Live and learn I guess. I want to point out that it is possible to build an accurate LG-1 option out of the box.

Construction starts with the cockpit and I was actually surprised by the level of detail on it. It was much better than I have seen in previous kits from that manufacturer. While not up to standard for the AMS modeler, it suffices for the “out-of-the-box” person. I wish there would have been seatbelts provided, at least as a decal (I used one from my spare box). They provide a decal of the IP which fits the plastic piece really nicely and give the sensation of the instruments being recessed.

My solution was simple and naïve. I trimmed the IP and the cockpit floor about 0.5 mm in each side until the inserting parts wouldn’t spread the fuselage. I did not glue them in place until I was sure that the wings roots would have no gaps.

Next I assembled the wings. No surprises there with a single piece for the lower wing which sets the proper dihedral and with two upper parts one for each wing. However there is a small gap in the landing light bay that needs to be covered.

I then presented the fuselage to the wings (with the IP and cockpit only dry-fitted) and made final trimming and filing of the fuselage inserting pieces until I got no gap at the wing roots. I then glued everything in place.

Once I got around those two issues –which are not difficult to solve- the rest of the assembly was very straightforward. I only needed to do some sanding on the major seams and fill a spot in the lower fuselage were I had a minor gap between the low wing and the fuselage.

Painting was accomplished with Model Master Enamels and after a coat of Future the decals were applied. Decaling was simple, with only limited decals to be applied. Typical of Hasegawa, the decals were a bit on the thick side and not truly opaque. You are provided with historical markings (blue swastikas) or alternative markings, which are blue crosses on white backgrounds. To deal with the slight transparency of the markings I’ve first applied the alternative markings, and when dry I’ve applied the historical markings on top, making sure the blue swastikas lined up with the blue crosses underneath.

I drilled the propeller spinner “tip” (where the cannon would have been) and added a printed-circuit-board connector to the opening where the cowling gun is located. That way the “business” end of the fighter looks from menacing.

The Finnish ground personnel kept their airplanes in pretty good shape so weathering was kept to a minimal - just a wash to highlight the few panel lines on the forward fuselage as most of the airframe was made out of wood. A final flat coat sealed the paint work and decals and the model was ready for the shelf.

Recommended for the average experienced modeler due to the needed modifications to ensure a good fit. In my personal opinion this is a kit that requires some modelling skills to be completed. It is not a “shake and bake” model, but it is probably the best bet for a 1/48 Lagg-3 in your collection.

Finally, I want to apologize for the lack of “in construction” pictures. I made a mistake and I deleted them from the camera before downloading and after painting was completed.

I would like to thank Hasegawa USA and IPMS/USA for the review model.