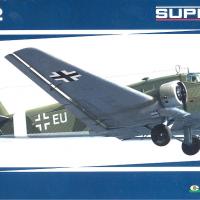 The Ju-52 was actually known as the Ju-52/3m. The 3m stands for 3 engine (dreimotor). The original Ju-52 was the Ju-52 1m which was single engine (einmotor). When the prototypes were flown, it was discovered that the plane was underpowered, and two engines were added, one on each wing.

The Ju-52 had an interesting exterior. The outer skin was corrugated, giving the skin far greater strength than a flat sheet of metal. This allowed the plane to have fewer spars and braces, so it could be lighter, which increased the cargo carrying ability. Unfortunately, the wrinkled skin also added drag, but in the 1930s there was much less interest in high speed and more interest in ease of assembly and maintenance.

The Ju-52 was known as “Tante Ju” (Aunt Ju) and “Iron Annie”. The Ju-52 remained in production until the end of the war, and some continued in service until the late 1970s.

The box contains 3 good-sized (for 1/144) brown sprues, plus one clear. There’s also the decal sheet and an Eduard mask. The instructions are printed in color on heavy glossy paper.

The box back gives side profiles for 4 early war aircraft. The instruction sheet gives color callouts and decal placement for all four, with 4-view profiles, all printed in full color

Eduard has a detail PE set for this aircraft. I also built this kit with the PE set, and there’s a separate review for the detail set.

Construction is pretty straightforward, although with the addition of all the PE details, it’s not a fast build. If you’re just building the basic Ju-52, this could be a fairly fast build. The interior goes together nicely, then it’s put inside the fuselage halves, and the windows are installed. This is where that mask set is worth diamonds. You can’t really paint the fuselage without putting the whole thing together, including the windows, and the mask allows this. The roof and vertical stabilizer are added next.

And it’s time for the wing. On the Ju-52, the lower wing was a single assembly. It’s that way on this kit too, allowing correct dihedral. You have to drill out the holes in the lower wing for the landing gear legs, then put on the upper wing parts. The ailerons and elevators are pretty complex on this kit, but the instructions give you a very good idea of how they need to be put together.

I decided to do the aircraft from South Italy/North Africa, which has a 70/71/02 top with 65 undersides. The rudder, elevators, and underside wing tips are yellow. With the Eduard masks installed and some 3M blue tape, it didn’t take more than a couple of hours to do the entire paint job. It could have been faster, but I waited for the paint to dry before adding a mask.

A coat of Future, and the aircraft was ready for decals.

The decals are by Eduard, and they are good quality. I’ve figured out that the less time it takes for the decal to come off the backing, the better the quality of the decal. Of course, I also give thought to how well the decal stands up to handling and whether it can be adjusted once it’s on the aircraft surface.

These decals only took about 15-20 seconds after dipping to be ready to slide off the paper. They are nicely opaque, can be moved, and snuggle down with an application of Micro Sol. This is particularly important on the corrugated surfaces of the Iron Annie. After the decals dried, I applied another coat of Future, then some Testors Acryl Flat.

I now put on the landing gear (including removing the masks from the wheels), the engines, and the propellers. I also added the PE cabin doors and the tail wheel.

Highly recommended. This kit has great fit – I used very little putty, except on the bottom of the fuselage where the wing left a gap. The paint schemes and markings are interesting, the decals are superior.

Thanks to Eduard for the kit and thanks to IPMS/USA for the chance to add to my Luftwaffe collection in 1/144.