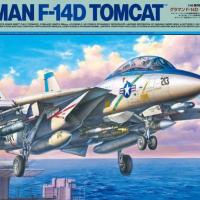 When Tamiya released its 1/48 scale F-14A, it was made the new standard in F-14 kits and from the layout, it seemed like the F-14D would be coming and now, it has arrived. First, it’s gorgeous as far as plastic, general engraving, etc. and that should not surprise anyone. Most of the parts for the F-14A are still in the box and won’t be used. The kit comes with four marking options:

Let’s dive into the kit. I started with the cockpit which is nicely detailed. Before you start, make a choice on which time frame you are going to make. The instrument [panels have options depending on before or after the planes were updated. Same for the side panels. The instructions are detailed and clear and I moved quickly through the build. You can see the build in the pictures below and the cockpit looks really nice when built and painted.

At the same time, I built the nose gear well which is similar to the F-14A build so there is not much to say except that things fit well and have great detail. I added the finished cockpit with side walls to the nose gear and was almost ready to button up the front of the fuselage. Again, see the pictures.

I prepped the inside of the fuselage by painting black and decided not to have an open refuel probe so I added the closed door which fit into place perfectly. Don’t forget to add the blank for the gun barrel. I added the cockpit/wheel well assembly and closed the front fuselage and set aside to dry.

While this was going on, I completed steps 9 through 12 which included adding the swing wing mechanism to the upper fuselage, adding the main gear wheel wells to the lower fuselage and painting. I added the holders for the horizontal stabilizer. To the top fuselage, I added the intake ramps. All of this was similar to the F-14A build. Also, make sure you open up the bottom fuselage holes for the armament.

Back to the front fuselage, I added the new gun port and the cockpit frame. Lastly, I added the "panel sticker" which surrounds the aft step for getting into the rear of the cockpit. I couldn’t find anything directly on this part but it looks like a reinforcement plate was added to this area. Fit again is superb.

That’s it for now. Join me for parts 2 where I will get the airframe together, prep the weapons I am going to use and hopefully get some paint on the kit.

Cockpit with side walls not installed