Jet Fighters of the U.S. Navy and Marine Corps Part 2: Mach 1 and Beyond 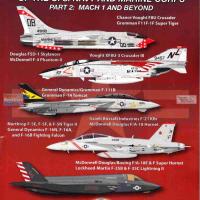 Released in time to be added to Christmas wish lists, this latest offering from Detail and Scale covers every jet fighter aircraft used by the U.S. Navy and Marine Corps from the F-8 Crusader to the new F-35 Lightning II. This book contains 208 photographs (188 in color) and 10 full color aircraft profiles, and picks up where Part 1 left off. I would highly recommend this book to all fans of modern Naval/Marine Aviation, whether a modeler or not.

Following a Forward and an Introduction, the book goes into the details of Aircraft Carrier Development starting with the modification of Essex-class carriers to add improved catapults as well as an angled deck (along with other upgrades). The Midway-class ships were also upgraded for the aircraft that were beginning to enter service. It was in 1951 that the Navy ordered the first “supercarrier”, the USS Forrestal (CV-59), which was a giant leap forward in carrier design. The Kitty Hawk-class ships would follow along with the single Enterprise-class ship and then an additional two Kitty Hawk-class ships before the Nimitz-class was introduced. In 2017, the USS Gerald R. Ford (CVN-78) was commissioned, and ushers in a new class of nuclear-powered aircraft carriers that will replace the Nimitz-class ships.

In the chapters covering the aforementioned thirteen aircraft, the lengths vary from two pages for the F-21A Kfir, which was leased by the Navy and Marines for four years beginning in 1985, to thirteen pages for the F-14 Tomcat. Each chapter provides a great amount of detail from the initial design, modifications, squadron information, and eventual retirement for most of planes covered. My hits include the high quality photographs and art work one would expect from Detail and Scale as well as the great information contained in this book. I have no misses to mention.

Being a former carrier sailor and modeler, I would highly recommend this book to any modeler looking for an up to date book on the modern fighter aircraft of the U.S. Navy and Marine Corps. As I mentioned previously, the historical information provided on aircraft carrier evolution and aircraft development will also make this book enjoyable for historians. I would like to thank the folks at Detail and Scale Aviation Publications for providing this book to the IPMS-USA for review, and I appreciate having been afforded the opportunity to write this appraisal. As always, thanks to you the reader for taking the time to read my comments.