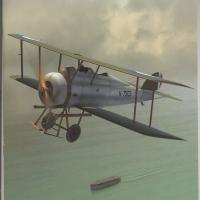 It is refreshing to see a quality publication dealing with an airplane that is little known and rarely publicized. This certainly applies to the Parnall Panther, an airplane with as obscure a service history as any I’ve heard of. Conceived during the latter stages of World War I, the Panther was produced in some numbers at the end of the war, approximately 150 being constructed by several manufacturers. In addition, the U.S. Navy procured two for flight testing, the Japanese obtained a dozen, and one was briefly on the British Civil register, flying in the 1922 Royal Aero Club’s Easter meeting.

The airplane was tested by the Royal Navy, and recommended for use by the fleet as a spotter-reconnaissance type aboard the Royal Navy’s aircraft carriers Eagle and Furious. Apparently, the type served well, and lasted until about 1924, when it was replaced by the Fairey IIID. It was a two seat biplane powered by a 230 hp. Bentley BR.2 rotary engine. The pilot sat in a raised cockpit immediately behind the engine, providing a spectacular view for takeoffs and landings. The gunner’s position was behind the pilot. One unusual feature of the airplane was its carrier storage method. The rear fuselage was hinged behind the rear cockpit, and folded over to the right side of the airplane.

As of now, there is no kit available of this airplane in any scale, but excellent three view drawings are provided in both 1/48 and the one true scale, 1/72. There are also 56 well-reproduced photos, color drawings of four aircraft, and some very informative accounts of flying and flight testing the Panther. The book is probably more complete than any you will see of an airplane of this vintage. The author states that a lot of information on this plane has survived, and the photos and drawings certainly bear this out. One really good feature of the book is the very detailed description of the airplane, enough, in fact, that a really creative homebuilder could probably build a flying replica relying on this book alone. The biggest problem would be finding a rotary engine, although it could be done with one of the small radial engines currently available.

This series of paperback books gives excellent coverage of the very interesting first few years of military and naval aviation, and this is the best I’ve seen so far. I would certainly highly recommend it to anyone with an interest in early aviation.