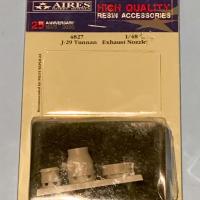 Aires began in 1995, making 2020 their 25th anniversary. They are based out of the Czech Republic and include not only the Aires brand name, but QuickBoost, Aero Bonus, and Wheelliant.

Pilot Replicas’ Saab J 29F Tunnan effort clearly surpasses that of any other Tunnan kits on the market. The first 1/48 Tunnan was Neomega's resin kit, which had not been improved upon by either the AZ kit with its distorted shapes, nor the Hobby Boss kit with its ~ 1/53 scale. Although the Neomega kit represents the exhaust marginally better and maybe has one advantage of an all resin cockpit, the Pilot Replicas’ kit has it beat everywhere else, especially on fit and surface detail. Pilot Replicas released a seamless intake shortly thereafter. Aires / Quickboost has stepped in and issued several resin sets for the Pilot Replicas kit, but what was still missing was a proper afterburner section. One can easily see this in the comparison in the picture below that shows the 3 pieces from Aires versus the 2 pieces from Pilot Replicas.

Aires provides three parts on a single sprue in light grey resin. The shortest part includes the turbojet turbine blades behind a representation of the afterburner. The next part is the exhaust fairing with nice interior detail. The last part contains the exhaust adjustable nozzle. All three parts are keyed with tabs that make sure they are aligned properly. When all three are assembled, the nozzle split should be vertical when installed. The instructions show the proper assembly with tab alignment and also show placement within the rear fuselage. The instructions also specify that the inside of both sides of the fuselage will need to be thinned to have the exhaust assembly fit properly.

This is where you run into a small problem. The last part shows off the beautiful exhaust nozzle, but it also includes part of the rear fuselage skin. You can’t just sand the interior until the Aires resin outer skin fits the Pilot Replicas outer skin as it would leave the exhaust too far out. You can also see from the photos below that the Aires resin outer skin does not match the profile of the Pilot Replicas outer skin. This leaves you a choice of either removing plastic from the kit fuselage or removing it from the Aires part. The other detail is that the sheet metal that surrounds the exhaust is vertical for half way and then is cut back by 12-degrees towards the front for the rest of the way. This Pilot Replicas kit has this feature correct. The Aires rendition does not appear to do so.

I’ve been thinking for some time a good way to resolve this issue, but I really don’t see one yet. Your choices are:

Right now I believe the first option is the best one as opposed to risking the much more expensive Pilot Replicas kit. I had high hopes for this resin set as it’s something the Pilot Replicas kit really needs. To use this set with either option above is going to take a lot of work. Right now, though, I can’t recommend this to anyone except very experienced modelers.

Thanks to Aires Hobby Models and IPMS/USA for the opportunity to review this set.

Aires vs Pilot Replicas 1001
Previous Next