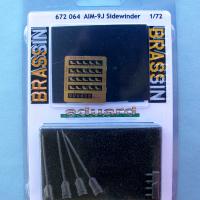 Developed as another Sidewinder for the U.S. Air Force, the AIM-9J was the follow-up to their E-model, and was based on the U.S. Navy AIM-9B. The AIM-9J first saw service in the skies over Vietnam in July 1972 during Operation Linebacker. It introduced the use of some solid-state components, and being equipped with a longer burning motor, the AIM-9J could remain in flight for 40 seconds. Hercules/Aerojet produced 6700 of the missiles, both new, and from re-purposed AIM-9B missiles. The AIM-9J measured 10 feet in length, 22 inches across the rear fins, had a diameter of 5 inches, and weighed in at 170 pounds. The AIM-9J was considered the first missile capable of use in a dogfight as it could be launched at up to 7.5g. This missile is credited with aerial victories over one MiG-21, and two MiG-19 aircraft during the Vietnam War launched from F-4D Phantom II’s of the US Air Force.

This Eduard Brassin set consists of four missiles and optional nose covers that are cast in gray resin, a single photoetch fret that holds the forward fins and rings to represent the exhaust of the rocket motor, and a small decal sheet. The photoetched parts include extra fins and rings, just in case, which is a nice benefit. The decals include three stencil markings, two yellow bands, a black band with white spots (representing the target detector), and a brown band for each missile. At least one spare of each of the decals is available, just in case they are needed.

As I mentioned in my previous review of the AIM-9B, D, E, and M missiles from Eduard, in over forty years of modeling, these are the absolute best representation of the AIM-9 that I have yet to work with in 1/72 scale. Eduard did a great job capturing the detail of the Sidewinder, and all of the fins are appropriately thin for the scale. I used a medium viscosity CA to attach the PE parts to my missiles, which I then painted a coat of Alclad Primer White followed by Model Master Acryl Gloss White. The metal parts are Vallejo Natural Steel, while the seeker is Vallejo Gun Metal Grey. The decals settled without issue using Micro Set and Micro Sol, and I then used Model Master Metalizer Sealer for the final finish.

My hits for this set would have to start with the fine level of detail cast into the resin missiles. The use of photoetched parts for the forward fins and motor exhaust ring are also positives for this release. The availability of the nose covers is a great touch, and although I did not use them on my AIM-9J’s, they may eventually make their way onto other Sidewinders on a future build, as the covers have remained unchanged.

My first miss is that there were no locating holes for the forward fins on these missiles, likely due to the fins having two attachment points on the mounting side. This requires careful alignment of the four fins, which will be more challenging for less-experienced modelers than the missiles that I previously reviewed. As with my other Sidewinder reviews, my other miss is that on my example, the wrap around band decals did not quite meet when wrapped around the body of the missile (this can easily be rectified by touch-up painting or ensuring that the gap will align with where the missile mounts to the aircraft launch rail).

In conclusion, I would highly recommend these Eduard AIM-9J missiles to modelers who are looking to add the later Vietnam-era Sidewinder to their 1/72 scale Air Force Phantom II. There should be no fit up issues when installing the missiles onto a plane, and modelers with some experience in working with resin and photoetched parts should find it easy to utilize this set.