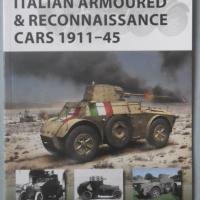 Osprey’s New Vanguard series is a well-established line of books featuring full color artworks, exploded and cutaway diagrams, and black and white photographs and diagrams. They can be a good resource for model makers, wargamers, or military history enthusiasts. I actually find that when I read them, they tend to inspire me to want to build a model of one or more of the subjects, which can be a good or bad thing depending on how you feel about your current stash level.

This book begins by detailing Italy’s use of armored cars well before the first world war. In 1911, Italy armored and armed a couple of Fiat trucks and used them in their war with the Ottoman Empire in present-day Libya. This was the first use of armored cars in war. Following World War I, and their participation in the Spanish Civil War, Italy saw the importance of the armored car for reconnaissance and infantry support, and they began to develop a series of armored vehicles for their police force, which were immediately put to use by their army.

The most widespread use of Italian armored cars was across the deserts of North Africa in World War II. There, the Italian army fielded their famous AB 41-43 models. These were much more successful than any of the tanks Italy developed during this same period, and the AB chassis became the basis for Italy’s “Sahariana” vehicles. The Sahariana was developed in response to the successful British LRDG vehicles and was designed more as a pack mule of additional supplies supporting long-range operations across the desert than an armored car.

As the war went on, the ultimate benefactor of the Italian armored car program was the Germans, who continued to produce the Italian vehicles after Italy surrendered to the allies and used them for convoy support and fighting partisans in the Balkans.

The authors are well-versed in Italian military history and their expertise on this subject is obvious. Having known little, to nothing about Italy’s armored cars or their development, I found this to be a very interesting read. I thought it could have benefited from more photographs or illustrations, but the ones provided were informative and interesting.

Overall, this was a quick and interesting read. The book is well researched and I’d recommend this book to anyone with an interest in the development of Italy’s armored cars leading up to and during World War II. Thanks to Osprey Publishing and IPMS USA for this review copy.