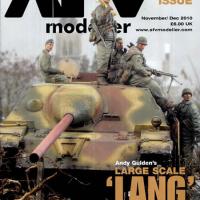 Many military vehicle modelers look forward to each issue of AFV Modeller showing up in their mailbox or on the local hobby shop’s rack. A look at the contents of issue 55 will quickly tell you why. In this issue, there are seven featured multi-page articles, forty-two product and publications reviews and a showcase of inspirational models entered in the 2011 Euro Militaire.

The first article in this issue documents Lars Richter’s build of the new Trumpeter 1/35 scale Russian T-62 Main Battle Tank kit. The eight-page feature covers everything from opening the box to adding the final weathering. In the end, Lars says the kit is highly recommended.

The second article describes how Andy Guilden went about conceiving and building the late winter diorama featured on the cover. Titled ‘Operation Spring Awakening”, the vignette places the new 1/16 scale Neograde resin kit of Germany’s Jagdpanzer IV L/70 in a snowy environment with a cluster of crew and foot soldiers apparently distracted by a distant sound. The diorama was awarded a gold medal and won Best Diorama at the 2010 AMPS International Convention.

Max Modeller magazine’s editor, Mark Neville, then builds the new Dragon1/35 scale M7 Priest kit…out-of-the-box, while on vacation in Scotland! The results of his weeklong ‘holiday project’ are stellar. They are almost enough to bring this aircraft model builder to seek out one of these new Dragon kits and purchase a round trip ticket to Scotland!

In the pages that follow, IIya Yut shares an X-treme detail walkaround of a Soviet JSU-152 preserved in Russia. The forty-two color photos should provide enough information to adequately aid anyone building Tamiya’s new 1/35 scale kit of this beast.

Next, Rob Harvey adds some Hardox field armor to a Tamiya Humvee in an article titled ‘Hillbilly Humvee’. In the six-page feature, Rob hangs enough level III protection Hardox steel plates on the vehicle to protect it against whatever I.E.D. the vehicle encounters. He then adds a heavy-duty rear bumper, benches for the troops, a roll bar and an M240B gun to complete his troop carrier version. Rob’s meticulous craftsmanship and realistic paint and weathering techniques make for a convincing rendition of an uparmored Humvee troop carrier.

David Doyle then continues his modelers’ guide to the Sherman series ‘SHERMAN up Close’ with photos from Scott Taylor covering the M4A2 early production version with direct vision slots. There are 28 fully captioned detail photos in this six-page article that provide a complete walkaround view of details of a well-preserved M4A2.

Finally, editor David Parker continues his multipart project building Trumpeter’s 1/16 scale King Tiger (with full interior) in a four-page documentation of the many scratch built details he has added…the mounting bracket and multiple extensions for the TZF-9d gun sight, the missing SF-14 scissors periscopes, the detailed loader’s hatch locking mechanism and numerous modifications to the tank’s hull ammunition racks. Previous articles have focused on the engine, suspension, the turret basket and the elevation mechanism for the main gun. It is obvious; the editor has a great passion for this subject and enjoys sharing it with the publication’s readers. So, look for more in AFV 56.

Ten pages are devoted to the reviews and the remaining seven pages cover some of the best models entered in the 2010 Euro Militaire competition. They are outstanding!

AFV 55 is highly recommended to military vehicle modelers. My thanks to AFV Modeller and IPMS/USA for the opportunity to review this issue.