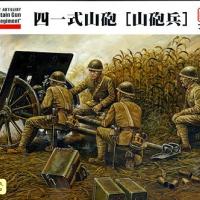 This is an all new effort by the folks at Fine Molds and is not the old tooling of the gun, which was done is white metal. The kit contains four total sprues molded in tan plastic: two for the gun, one containing the crew figures, and the final sprue contains the personal gear and weapons of the crew. There are also four strings which represent the tow lines, and a rather large decal sheet.

The kit is very well done, and the fine details of both the artillery and the equipment are apparent in the photos. This is a very nice effort which can easily be completed in short time.

The directions are well done with top notch illustrations. The front page is all in Japanese, but the assembly directions have English subtitles. Color callouts are from the GSI Mr. Color line, but one column on the cart also has the Tamiya colors listed.

The figures included can only be posed in the position of pulling the gun with the provided tow lines. This may be a downside to some modelers looking pose the crew in a firing position. However, the figures provided with this kit in the “tow” position offer some very interesting diorama possibilities.

This is a great little kit and well worth picking up for your collection. I recommend this kit to anyone interested in the subject or time period. It is great to see more WWII Pacific Theater items on the market.

Thank you to Fine Molds for continuing to add to their 1/35 WWII Japanese line, and thank you to Dragon Models USA for the review sample.