Images of War The Waffen-SS In Normandy 1944 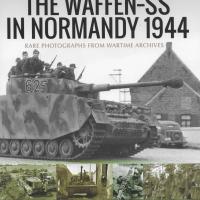 Pen & Sword Books are not new to the plastic modeling industry. The UK based publishing company has been around since 1990 while churning out titles covering subjects from military, aviation, maritime and including other areas of history.

With over 228 books in the “Images of War Series”, Waffen-SS in Normandy 1944 is their latest addition published in February 2022. The author Ian Baxter has written other books in the series including, His previous books in this Series include Hitler’s Boy Soldiers, Nazi Concentration Camp Commandants and German Army on the Eastern Front – The Advance, German Army on the Eastern Front – The Retreat and Nazi Concentration Camp Commandants, The Crushing of Army Group (North) and the SS Waffen Division series including SS Leibstandarte Division and SS Totenkopf Division At War. The book is comprised of an Introduction, four chapters, an epilogue, and an appendix. Each chapter starts with 1-2 pages of introduction followed by several black and white images. All images have captions by the author describing what the reader is viewing.

As Hitler’s premier combat branch of the Nazi party, Ian Baxter describes in images the activities of the Waffen SS during the Normandy Invasion starting with the prelude ending with the retreat from the loss at the Falaise Pocket. This book is a chronological summary with rare images mostly unseen before.

Chapter One – Prelude to Invasion

In this chapter the author gives a short background on the whereabouts of the Waffen-SS prior to their being sent to Normandy. Included on these pages are photos of the commanding officers of each unit. What follows are several photos of the Waffen-SS soldiers during decoration ceremonies, in training and more importantly closeup images of the uniforms. This would be helpful to the modeler especially useful in detailing figures. On page 16 is an interesting picture of a large castle-like structure with members of SS Leibstandarte division standing in front. Page 25 shows two photographs of the 12th SS Panzer Division with the PzKpfw. IV.

Four of the closest Waffen-SS divisions closest to Normandy was the Hiltlerjugend Division, known as the “baby milk division” due to their youthfulness, did not arrive around the area of fighting until June 7. What follows in this chapter is the authors inclusion of imagery showing the coastal fortifications along with excellent photos of Panzers IVs and Tiger tanks on pages 57-58. Several images could be amazing subjects in a diorama setting.

The author in the first three pages of this chapter describes in detail the savagery the SS divisions displayed especially with the murder of the surrendered 82nd American Airborne by the 507th Fallschirmjäger in the village of Graignes. After the American soldiers were murdered by the SS, they rounded up the civilians, committed atrocities toward them, ransacked the houses before setting fire to the village. The two-page photo spread on pages 66-67 also shows the vengeance the Waffen-SS committed upon the civilian populations during WWII. These three images are photos taken in 2020 of the destroyed village of Oradour-sur-Glane, now a memorial to those who lost their lives.

On page 71 we see an excellent image of a knocked-out Panzer IV near the Villers-Bocage. It was in this area the British 22nd Armoured Brigade suffered significant losses and eventually surrendering 230 British soldiers.

On page 84 are three photos taken of a Panther driver and a crew member stocking the tank with shells. All three are clear detailed images with captions the author has added.

On the next four pages, the author summarizes the arrival of the final Waffen SS divisions arriving at the front between June 15 and the 30th. On page 96 is another detailed image of a French road sign pointing to Caen. In the background the destruction of the area leading to Caen can be seen by the reader. All the images to follow in this chapter are clear with a few pages showing tanks, such as Panthers, Panzer IV’s and 15cm howitzers.

The author in the Epilogue wraps up this book with a few pages summarizing the destruction the Waffen-SS encountered during the Normandy campaign. On page 117 another image is included by the author showing a destroyed sedan vehicle in the aftermath at the Falaise Pocket. For the modeler, another idea for a diorama is presented.

The Image of War Series by Pen & Sword Books are not new to this reviewer. Having several books in this series on hand, this will be a welcome addition for reference purposes. The black and white images contained in the book are clear with some rare images I had never seen before. The author includes with each image a caption describing in detail what the reader sees in the image. If the author's objectives were to present a detailed summary of the “The Waffen-SS in Normandy 1944” with imagery, he did in fact meet this goal. The book is easy to read with amazing images and captions.

This book will make an excellent addition to any modeler or military historian’s library. Highly recommended.

Thanks goes out to IPMS/USA, Casemate Publishers and Pen & Sword Books for this review copy.