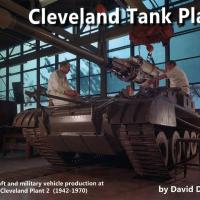 David Doyle’s latest book is with a brand new publisher, G-104 Press. Founded by Scott and Kim Taylor of London, Ontario, this volume represents a new concept and approach by David Doyle. Rather than his customary monograph on a single (or series of) vehicle, ship, or aircraft, this volume focuses on the history of a facility: Cleveland Plant 2 that originally was built in 1942 to construct the Boeing B-29 Superfortress. This book is presented in landscape and includes 112 gloss pages. G-104 Press does not yet have a website, but they are planning on one. Presently, the book is sold through David Doyle’s website. Scott and Kim Taylor are hopeful to bring additional books addressing military vehicles geared towards the enthusiast, historian, and modeler. Scott and Kim Taylor can be reached through their Thachweave Products webpage at thachweave.tripod.com where they sell some unique modeling products or you can often find them at IPMS and AMPS conventions.

After many years of being published in enthusiast publications focused on military vehicle restorations, David Doyle ‘graduated’ to full-fledged books in 2003. His first book was a hefty 512 page history of US military vehicles. He has now had more than 100 books published in military vehicles, aviation and naval topics. David and his wife Denise have amassed a collection of ten Vietnam era military vehicles that he still displays at shows. In June 2015, he was honored with the Military Vehicle Preservation Association’s Bart Vanderveen Award, given in recognition of "...the individual who has contributed the most to the historic preservation of military vehicles worldwide." Be sure to check out David’s website at https://daviddoylebooks.com where you can see and buy (at a discounted price off of MSRP) all his books that are still available.

This book’s subtitle is ‘Aircraft and Military Vehicle Production at Cleveland Plant 2 (1942 – 1970). I would note that the building is still fully operational today, only as a convention center. In fact, I believe David Doyle was attending a military vehicle convention during the release of this book, when I received this book for review. I counted 208 well captioned photographs; 55 in color and 153 in black and white, many of them previously unpublished. There is one color drawing of the plant layout and a black and white architect’s drawing of the proposed plant.

The Plant’s first production B-29 was scheduled for delivery in September 1943, so of course the Army Air Force cancelled production of the Superfortress in July 1943 so the plant could focus on the fighter of the future, the Fisher P-75 Eagle! Today you can see the sole example remaining of this aircraft at the USAF Museum in Dayton, Ohio. The end of World War II saw all work cancelled and the facility drifted to other uses; from being a host to the National Air Races to storing beans. North Korea’s attack of South Korea on June 25, 1950, saw the plant re-activated.

Now it was resurrected to manufacture armored vehicles by Cadillac, starting off with the T41E1 Walker Bulldog. Production of the M42 Duster followed through June 1956. The plant remained active building tanks until the revolutionary MBT-70 prototype was built in 1969. The US Army then intervened, judging that the Cleveland plant was not suitable to build a tank this heavy, bringing the end of tank production to Cleveland.

David Doyle generally follows the plant through the years noting the year of the photographs at the top of each page starting in 1942. Until you progress to the ‘In Action’ chapter, you get to view many production line or roll out photographs of the aircraft and armored vehicles from this facility. This includes B-29 sub-assemblies, the Fisher Eagle, the Douglas XB-19A, and the Boeing XB-39 Superfortress.

The armor includes the M41 Walker Bulldog, M42 Dusters, M56 Scorpions, M108 and M109 howitzers, M114 command and reconnaissance carriers, M551 Sheridans, and finally the MBT-70 prototypes. The ‘Cleveland Armor In Service’ depicts the Cleveland Tank Plant’s vehicles in action, with many color photographs. This again follows a chronological format starting with a T41E1 tank in 1941 and ending with a 1991 photograph of a M551A1 Sheridan during Operation Desert Shield.

This is a gorgeous soft-bound book and is well worth the money. David Doyle provides lots of detailed photographs with his customary detailed captions. I liked the approach David took on focusing on the factory and its products. While you won’t see a monograph of each aircraft or armored vehicle produced, David had grabbed some very interesting photos of the plant’s products. I do look forward to the next book in this series.

My thanks to David Doyle Books at (https://daviddoylebooks.com) and IPMS/USA for the chance to review this great book.