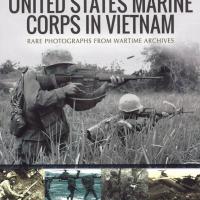 This edition in the “Images of War” series provides a overview of U.S Marine Corps operations in Vietnam, from the initial deployment of a Marine Hawk anti-aircraft missile battery near DaNang in February, 1965, followed a month later by elements of the 9th Marine Expeditionary Brigade, to the final withdrawal of Marine ground troops in June, 1971. Marine air was finally withdrawn in September of 1972, with off shore Marine aircraft and security forces participating in the evacuation of Saigon in 1975 (the book’s photo coverage ends with the withdrawal of Marine ground forces).

The limited text is arranged chronologically in four chapters:

The text provides a limited overview and assessment of Marine activities, occasionally highlighting little known facets of Marine involvement in the conflict, such as the frequent differences between Army and Marine tactics and goals, with the ensuing disagreements between MACV commander General William Westmorland and senior Marine commanders, as well as degrading of morale for Marines on the ground as the war neared its conclusion. The Tet Offensive, as well as the sieges of Con Thien and Khe Sanh receive considerable coverage with the photos as well as the text, while earlier operations are covered in less detail, if at all (one disappointment was the near lack of coverage - just one photograph - of Marine ship to shore operations in 1966 and 67).

The vast bulk of information is provided by the multitude of photographs. What detailed information there is comes with the photo captions. The overwhelming majority of photos illustrate Marine infantry, with a lesser number of images of armor and artillery forces, and a few of helicopter and fixed wing air units. The images are generally arranged chronologically. However, while the photos often show the uniforms and weapons to good advantage, the reader should view their sequencing with a grain of salt (for example, while some photos sprinkled throughout the book show Marines in camouflage utilities, those uniforms weren’t issued until late 1968, a tidbit of information noted in one photo caption).

All in all, this is a good primer of Marine Corps activities during the Vietnam War. The photos in particular provide an encompassing view of Marine riflemen in action, and offer a good starting point to see how Marines operated in all types of conditions present in Vietnam.

Thanks to IPMS and Casemate Publishers for providing this volume for review.