Images of War, The Phantom F-4 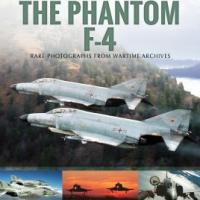 The McDonnell/Douglas F-4 Phantom is arguably one of the best all time fighter aircraft ever made. Developed for the US Navy as a long-range all-weather fighter aircraft the Phantom saw a large number of variants for the Navy, Air Force and a host of foreign users. This book tells that story in a concise, well written and interesting manner.

Written by British author Martin B. Bowman the book The Phantom F-4 is a soft bound volume that contains 144 pages in four chapters in addition to acknowledgement and introduction sections. There are 120 black and white photos throughout. Brought to us here on this side of the Atlantic by Casemate Publishers the color cover, by Dominic Allen features two German Phantoms, two Marine birds and two in flight photos.

The book opens in typical fashion with acknowledgements by the author. The next few pages contain the introduction to the Phantom. It’s short and to the point and covers the development and basic upgrading of airframes to develop the numerous variants produced over the Phantom’s lifetime.

Chapter 1 goes into greater detail on the airframes flown by the US Navy and Marine Corps. It details the timeline and upgrades from the first naval production version, the B model and culminating is the much-improved S model. Changes to avionics, threat radars and on-board weapons are also discussed.

Chapter 2 contains information on US Air Force models and their development. The Air Force requirements were much different than Navy needs, as there was no need to operate from sea off carriers. Additional differences were incorporated into Air Force birds, such as one pilot station which freed the back seater to function as a Radar Intercept Officer (RIO), weapons officer and a valuable extra set of eyes when needed.

In Chapter 3 is all about the British versions of the Phantom. The first British aircraft were K version variants that were designated FG.Mk1 for the Royal Navy to replace the Sea Vixen. Powerplants were changed from the American Pratt and Whitney J 79 engines to the British Rolls Royce-Spey replacement. Various versions followed ensuring the Phabulous Phantom would serve Britain well for many years,

The Chapter 4 focus is on other foreign users such as Israel, Germany, Greece, and South Korea among others just to name a few.

In summary, the Phantom has had an exceptionally long and distinguished career in many combat situation and theaters of operations. It has been flown by both the US Air Force Thunderbirds and US Navy Blue Angels proving it meddle many times over. This book covers a good deal of the Phantom’s glorious history in interesting text with some amazing accompanying photos. Whether your interest in in Navy or Air Force birds or that of another operator you will not be disappointed with the visual impact of the pictures included in this book. I was impressed with the details and operational environments that are represented in the many photos. I highly recommend this book to all lovers of the Phantom either modeler or anyone with a past involvement or ongoing love affair with the F-4!! And I must confess, I fall into the latter category!!

My thanks to our friends at Casemate Publishers and IPMS/USA for supplying this sample for review.