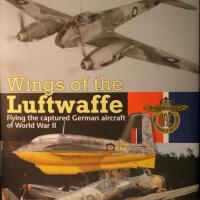 Eric Brown is one of those very fortunate and rare individuals who happened to be not only in exactly the right place at the right time, but was eminently capable of extracting the most out of the opportunities presented him in the bargain. His qualifications and accomplishments as an airman leave most of the rest of us, military and civilian alike, deep in the shadows of the backfield. A distinguished combat veteran, he went on to become a world class test pilot logging test, experiment and evaluation time in 487 types of aircraft. In addition to 2,407 aircraft carrier landings, he has amassed a record of achievements, accomplishments, and awards that really do take the entire rear dust cover to list-without the need for filler and no double spacing. By anybody’s standard, Capt. Brown is the “real deal”.

A good number of the 487 aircraft types in Capt. Brown’s log book (a photocopied page of which shows up on page 78) were Luftwaffe aircraft that fell into Allied hands as spoils of war at the close of World War II. If he didn’t fly them all, he came very close. His duties as team leader of the contingent from the Royal Aircraft Establishment (RAE), assigned to seek out and test captured German aircraft, had him not only in Britain testing examples brought in to the facilities at Farnborough but ranging over captured German airfields throughout the British Zone of Occupation on the Continent to locate whatever equipment happened to be there.

The 261 pages of Wings of the Luftwaffe present a fascinating and detailed collage of pilot reports on a truly astounding array of German aircraft, all presented in Brown’s easy going, concise and imminently readable style. Without doubt British through and through, he is clearly first and foremost an objective professional. His evaluations are singularly devoid of any hint of bias or provincialism and laced with enough anecdotes, self depreciating humor and British understatement to keep the whole entertaining as well as technically absorbing.

Naturally, we get an inside and up close view of the old staples, FW-190, Bf-109, JU-88, Stuka etc, that much is to be expected. Who, however, ever thought to be treated to a first hand, over-the- cowling view of the Blohm&Voss BV 222, He-177, FW-189 or Do-18 and other types even more esoteric? It’s all here, how they came to be, how they worked, how they flew; the great, the pretty-good-mostly, the kind of bad, the pretty ugly and the real dogs. Brown delivers his evaluations, as always, straight from the shoulder, but with unfailing good humor, clear and readable, refreshingly devoid of the self aggrandizing “excuse- me- miss- have- you- seen- my- jet- keys?” jargon.

Quite obviously I like this book. However, my appreciation for it is based on my point of view as both a historian and an airman. As a model builder, I must admit that if detailed documentation for the reproduction of any of the aircraft covered in miniature is a criteria, then Brown’s work if of somewhat lesser value. There are pictures of each type, cutaway drawings and some well done profiles; but nothing that will rival any sort of “walk-around” work. The singular exception would be for a builder wanting a collection of captured Luftwaffe types in RAF test markings, (it would be an interesting series) then this book would be a treasure trove, since most of the photographs represent exactly that documentation.

My thanks to Specialty Press for the review copy.