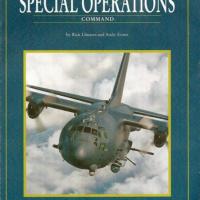 Several weeks ago, I attended a change of command ceremony for a unit of the United States Army Special Forces at Ft. Bragg. My mind was still full of memories of Ft. Bragg and the visit to the Airborne & Special Operations Museum when this book became available for review. I jumped at the chance to do the review. Thank you SAM Publications for providing the review sample.

The Air Force Special Operations Command (AFSOC) probably had its beginning during WWII. It was not until the Vietnam War that Special Operation came into its own. During that war elements of the U.S. Air Force provided concentrated firepower to confined areas, infiltrated and exfiltration troops into and out of enemy territory and provided resupply and refueling operations all across enemy territory. However, it was the catastrophic failure of Operation Eagle Claw, President Carter’s attempt to rescue 52 Americans from Tehran, Iran in 1980, which was the catalyst for forming a Special Operations Command. After several years of discussion and planning the AFSOC was finally created in May 1990. Authors Rick Llinares and Andy Evans give us a detailed look at the aircraft used by AFSOC today.

The book is divided into nine chapters and three appendixes. After Chapter 1, Special Operations, History and Overview, the remaining chapters cover the various aircraft used by AFSOC. They include:

Each chapter follows the same format. First, there is a general discussion of the aircraft and the evolution it has undergone. Specification, equipment, performance, impressions and some flying stories are shared. Many wonderful color photographs are interspersed in the text. Several color profiles of actual aircraft follow the general discussion. These profiles are an excellent resource since they show various color schemes, markings and in some cases nose art. The last segment of a chapter is the walk around. Many clear detail photographs are provided. This is a must for the modeler.

Appendix 1 is a glossary of terms, very useful with all the abbreviations and acronyms used in the book.

Appendix 2 details the story of the XFC-130H. It was designed to land and take off on a soccer field in Tehran in a second attempt to rescue the 52 Americans. This very interesting aircraft never accomplished what it was intended to do. After the crash of the test article, the project was cancelled.

Appendix 3 is a table of specification for all the aircraft discussed in the book.

In summary, this is one fine book. It is well formatted and easy to read. The full color photographs are crisp and sharp. The profiles and walk around sections are perfect for the modeler. This would be a book any historian would want, but it is the modeler who would benefit from it the most. I can easily give this book a “Highly Recommended.”

My sincere thanks go to SAM Publications for providing this wonderful book to IPMS/USA and to IPMS/USA for allowing me to review it.