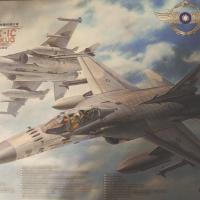 The F-CK-1C "Ching-kuo" is a single-seat Taiwanese fighter jet that looks like a cross between an F-16 and an F-18 but is about the size of an F-16. It has the sleek lines and single tail of the F-16, but the dual intakes similar to the F-18. AFV Club also makes a kit of the two-seat F-CK-1D.

The kit comes packaged in a fairly sturdy box with beautiful artwork on the lid. Upon opening the kit I was impressed with the very high quality of the molding. Panel lines are very crisp and the molded detail is quite impressive. All of the sprues are in separate bags, as are the clear parts and a small photoetch fret. There are also a couple of bags that contain resin parts and a metal pitot tube. One of the bags has a nice resin instrument panel and side panel, and the other bag contains a Wan Chien cruise missile which is only mentioned in the historical information at the beginning of the instructions. It is not even shown in the parts list. I did find some photos on the internet that show the Ching-Kuo carrying it on one of the wing pylons. The small photoetch fret holds rearview mirrors and a couple of screens, but oddly it does not have seatbelts which would have been a nice addition to an otherwise complete package. I purchased an Aires seat that I may add at a later date.

The instruction sheet is good for the most part, but there are a couple of issues which will be pointed out in the review. Detail painting is listed throughout with actual names of colors and also FS numbers where applicable.

Construction starts with the cockpit, which is nicely molded and detailed, however, this is where I found the only molding problem in the form of a sink mark on the side of cockpit part B2. I brush painted the base color of the cockpit with Gunze Mr. Color paints, and I think that using a brush instead of an airbrush was a mistake. The forward fuselage ended up being very difficult to join together once the cockpit was installed. I ended up doing a lot of sanding and test fitting to try and get the two halves to go together. Perhaps the fit tolerances are so tight that my brush painting gave the inside of the fuselage and sides of the cockpit just a little too much thickness? The fit of the rest of the kit was quite good, so I’m guessing that most fit problems were probably my own doing. I finally got the two halves closed with the aid of clamps. I glued it together in three phases starting at the nose and working my way back letting the glue set up for a couple of hours between each phase.

Step 5 is a bit confusing. You have two different options for the brackets that hold the TC-2 Skysword missile under the fuselage, but there is no indication as to why you would pose it one way or the other. I choose the option that placed the missile in a stowed position.

The fuselage from the intakes back is split horizontally and includes the upper and lower wings. The lower wing is dealt with first, as it has a lot of parts to be added to it. Be aware that the part numbers for the wheel wells (parts F10 and F14) are reversed in the instructions. The intake trunking does not have any locating tabs, so it took some guesswork to get them lined up properly. It’s just a matter of rotating them around until they match up best with the lower fuselage.

Part F13 fits vertically inside the fuselage and holds the intakes and the engines in place. I shaved off the upper locating tabs on it because it wasn’t quite perpendicular to the fuselage. Things seem to fit a lot better after doing that. And don’t forget to add the polycaps at the rear of the fuselage for the horizontal tail surfaces. Guess who now has a couple of extra polycaps to add to the spares box?

The fit of the upper wing/fuselage to the lower portion was excellent. There are separate flaps and leading edge slats. I left off the flaps until I got to the painting stage, as I wanted to pose the aircraft with the flaps down as I had seen in many pictures on the internet. I left off the tail planes to ease painting of the somewhat complicated camouflage scheme.

The airframe comes together in Step 12 with the forward fuselage being attached to the main fuselage and the vertical tail/rudder also being attached. The intakes and nose are also added, and it all went together very well. Be careful handling the airframe in the area of the forward fuselage. The leading edge extensions are quite thin and I managed to bend one slightly while getting everything together.

Steps 14 thru 17 deal with the nose and main landing gear. As I usually do, I waited until after painting to add these parts. There are some very small and delicate parts here, so be patient and careful and you will end up with some very fine looking legs. On the aircraft, that is. Also, note that the main gear doors (parts D24 and D25) are reversed in the instructions. I started painting after Step 13, which turned out to be a bad idea. There turned out to be several other small parts in Steps 18 and 19 that I wish I had added before painting.

The canopy is clear but has a seam running down the middle that has to be dealt with. There are also several parts to be added to the inside of the canopy, some of which I just couldn’t handle. I was able to get part I1 installed and the PE mirrors added to it, but I couldn’t figure out how part I10 attached, so I left it off. I feel like the instructions were a bit of a letdown in this area. I also left off part D23, which I think is some sort of inner lining for the canopy, but the part was warped and I didn’t really want to deal with trying to repair it. Therefore, I opted for a closed canopy on my model.

There are four different marking options, but all of them use the same paint scheme, which is comprised of 5 colors. Three of the options are low-viz schemes, but option B has a colorful orange and blue set of decals that cover the vertical tail surfaces. I chose option A which is from the 3rd Tactical Fighter Group at Tainan Airbase. The decals are thin and in register and snuggled down nicely using Micro Set and Sol. The decal film area around the images was too generous on many of the stencils. The eagle decal on the tail was not quite opaque enough to cover the camouflage colors underneath and the colored bands that went around the AIM-9 and TC-1 missiles could have been slightly longer. I had to touch up paint a couple of areas where they didn’t quite reach.

After that, it was just a matter of adding all the fiddly bits and giving it a final clear coat. Overall it is a very nice kit that is definitely geared toward the more experienced modeler. There are several small and thin parts which need a lot of care when removing from the sprue and in handling and attaching. In the hands of an expert modeler, this kit could turn into a real show-stopper. My sincere thanks to AFV Club and IPMS for the chance to build and review this excellent kit. Highly recommended!