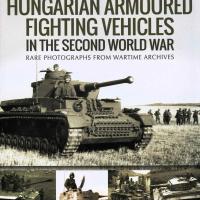 The coverage of WWII in print has been profound covering many aspects or the Untied States, Britain and Germany in the European theater. What hasn’t been covered as well is the remainder of the Axis powers and their contributions and participation in the conflict. Writer Eduardo Manuel Gil Martínez aims to correct part of that with this book covering Hungarian Armor in WWII. The book covers from prewar to the end of WWII with superb period black and white photos and an explanation of the people, battles, and equipment involved.

The book starts, as expected, in the beginning where the Hungarian armor was generally under-gunned and under-armored. Their initial armor covered in Chapters One and Two were wholly inadequate in that many only had machine guns for attack and armor that could be pierced by small caliber weapons. In addition, the Hungarian anti-tank guns literally bounced off the Russian armor it was facing. During this time, Mr. Martinez covers the battles, number of tanks lost, and how the battles evolved. As a summary, in the initial battles there were 200 officers and 2500 men dead as well as 1500 missing in action and 7500 injured. The armor did worse, with all Ansaldo tanks lost, 80% of the Toldi 1 medium tanks lost, and 90% of the rest. On the positive side. 8000 Russians, 65 guns and 50 tanks were captured by the Hungarians, but the costs were very. Very high.

As the war progressed, German armor came to the forefront with the Hungarian forces. Many were license built by the Hungarian plants. Looking through chapters Three and Four, you will see pictures of Panzer 38, Panzer IV as well as improved support groups. Also covered in this section are the Anti-Aircraft tanks like the 40M Nimrod. The battles are covered again from the 1st Battle of Uryv to the 3rd Battle of Uryv. All of these are accompanied by excellent narrative and wonderful photos showing the Hungarians as they got better and better armor. I also want to say that the pictures are very crisp and clear too.

Chapters Five and Six are in depth coverage of the defense of Hungary and the end of the war and the fighting. This is the largest section of the book and is well illustrated. One interesting point I discovered as I progressed through the boom as that the Hungarian Army actually operated in Poland for a period of time until pushed out by the Russian Army. The sacrifice these men made was terrible losing ALL of their tanks. Not even one survived. Also notable in this chapter is the use of German tanks and other weapons. While the Hungarians improved their armor, they were still behind the rest of the world. In the end, the Russians were too strong, and Budapest fell and slowly afterward the Axis abandoned Hungary. All of this is done in the context of the armor involved with great pictures of Panzer IV’s and other armor in great pictures in Hungarian markings.

The conclusion of the book is grim with many of the surviving Hungarians being deported to Siberian labor camps and many not ever coming home. This book is a great historical look at the Hungarian armor and battles of WWII but it also a tribute to the men of Hungary who fought against overwhelming odds in outdated equipment to protect their homeland.

Highly recommended for both its text and pictures. It truly sheds light on a smaller part of the war but certainly not a less significant part. My thanks to Pen & Sword and Casemate Publishing for the chance to review this item.