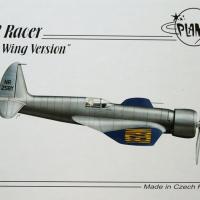 I’ve always been a fan of the iconic silver and blue Hughes H-1 Racer. I was familiar with the long wing variant, but as it turns out, two sets of wings were made for this one of a kind beauty - long wings for endurance flights, and short wings for speed records. You’ll have to decide for yourself which one appeals to you, but no worries - Special Hobby/Planet Models provide both in 1/48 resin.

The kit itself is fairly simple and straightforward - resin one-piece wings, fuselage halves and cockpit, engine “cob” and many, many cylinders, etc. Two vacuum-formed canopy blanks are included, good for those of us who need a spare. (Although I lucked out this time). The kit includes decals and a simple but thorough exploded view of the assembly sequence.

Bear in mind that this is a limited run resin kit and as such, you have to plan on a fair amount of fitting and filling. The only area that gave me some issues was the large gap between wing and fuselage on the lower surface - see photo. I was able to fill this with a combination of sheet plastic, a sprue plug, and liberal applications of CA, but it fought me all the way and the finished undersurface still shows some evidence of that struggle. Hard to hide under a metallic finish.

The engine builds up into a nice representation of the iconic Pratt & Whitney R-1535 twin-row 14-cylinder radial engine, but good luck getting the finished assembly into the cowling. I had to resort to grinding off some cylinder head and rocker arm housings to get a tight fit - fortunately, none of this drastic surgery is visible in the final assembly.

There are no alignment pins molded into the horizontal stabilizers, so I drilled matching holes in the mating surfaces and added pins from sprue.

The prop assembly is molded in three pieces - two blades and the hub - and I used slow drying CA to ensure I had the proper pitch and linearity of the assembly. Even so, I managed to knock one of the blades off during subsequent masking and painting. Yes, the aft surface of the blades are painted in a red-burgundy color in lieu of the normal flat black, and I’m not sure why - but it does add a splash of interest to the model.

I took my time dry fitting and trimming the canopy until it was a good match to the fuselage contour. Once I got the fit where I wanted it, I dipped the part in Pledge Multi Surface (the current iteration of Future). I then cut canopy frames out of some metal “speed tape”, stuck them to the canopy, and again dipped it in Pledge to seal them in place. I then used Pledge as the adhesive to attach the canopy to the model.

Painting was a combination of Vallejo Air Acrylic Blue for the wings and Testors’ Buffing Aluminum for the body. I painted the body first as I was reluctant to mask the Aluminum, but as it happened, when I removed the masking from the blue surfaces large sheets of it peeled away from the aluminum base. I was able to lay these back down and a coat of Pledge acted to bond them in place. I then sprayed Pledge over the wing surfaces to get a gloss surface. Buffing out the Testor’s was done with a rag wheel in a Dremel tool, which was problematic - I buffed through the paint in a couple of spots and when the buffing wheel wandered onto the blue it deposited silver fragments, which I subsequently cleaned up with model wax. I’m no expert in metallic or gloss finishes and it shows in the final product.

I was concerned about applying yellow decals over the dark blue wing color, but they turned out pretty well, with good opacity. In an effort to reduce clear carrier film, I cut the serials into individual letters and numbers and used a piece of tape to align them as I applied them. I added the registration numbers to the vertical fin, and somewhere along the way one side simply disappeared - they must have stuck to my fingers as I was handling the model. Thus, no phots in my review from the starboard side….

The landing gear and wheels are straightforward - oh wait, no, they are not. Be careful to match the forward splay of each strut as you install them as there’s not much positive location for the gear. Again, slow cure CA to the rescue.

You’ll need to add a pitot tube and whatever the small tube atop the vertical fin is with fine rod or stretched sprue. You also need to fabricate and add 8 small braces that fix the cowl to the engine - I used soft wire for this, but if I could do it over, I’d use fine stretched sprue.

This is not a beginner’s kit and I was a bit ham-handed during the build - the final model isn’t up to my personal standards and I’ll admit that here. Careful modelers can get a really nice replica with additional time and patience; in fact, I saw a very nice version entered in this year’s National Contest in Chattanooga.

Our thanks go out to Jiri and his great staff of friends (and family) at Planet/Special Hobby. These guys are great supporters of IPMS/USA and during the recent show gave us a big stack of review products, which you’ll see here over the next few months.