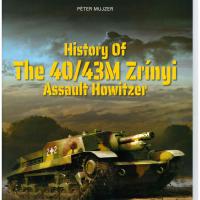 While Kagero has an established reputation for quality books that modelers appreciate and use on their reference shelves, they have recently upped their game with the new introduction of the inCombat series. Number 08 in the series is History of the 40/43M ZrÍnyi Assault Howitzer. As a fan of obscure armored vehicles, this book had a timely arrival, especially as I am in the process of painting Bronco Models’ Hungarian 44.M ‘Zrinyi’ I 75mm Assault Gun (the differences between the variants are clearly spelled out in this detailed book).

Kagero Publishing is a well-known Polish company that provides detailed photographs and color profiles of its subject matter. While I can’t speak to what makes its inCombat series different from its others, I am thoroughly impressed. While the major armored variants have been covered extensively, lesser-known vehicles have their details hidden in grainy black and white photos, if they can be found.

History of the 40/43M ZrÍnyi Assault Howitzer is covered in 64 pages in a standard format with a logical arrangement beginning with the need, design and production, organisation (the book is written by a talented Polish author in the Queen’s English), history, camouflage and markings, and a detailed bibliography. The range of black and white photos is amazing, as are both the surprising number of World War II-era color photographs and profiles. There are also detailed technical drawings of the vehicle, powerplant, crew layout, etc.

This book has helped considerably in building the Bronco Models Hungarian 44.M ‘Zrinyi’ I 75mm Assault Gun. There are a few confusing points in the construction of the model, but this book clearly showed what goes where and has helped immensely with the kit.

If you are a fan of little-known World War II armor, or just curious, this is an amazing book I cannot recommend enough. Until now, the only book I found that sufficiently covered Hungarian armor is Magyar Steel by Csaba Becze. While a good book in its own right, it covers the broad range of Hungarian armor in World War II. If you want to focus on the Zrinyi family, this is your book, bar none. This book is worth its price just for the World War II era photos, a majority of which I have never seen before.

Profuse thanks to Casemate Publishers and IPMS-USA for providing the review sample.