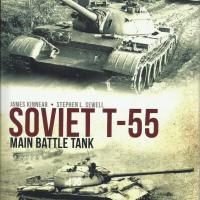 The Russian T-54 and T-55 are without doubt the single most ubiquitous tank designs ever produced, having served in literally every theater of war since their initial design work back in the 1950’s. As such, they deserve a special place in any modern armor enthusiast’s collection. This book helps iron out some of the details for the detail conscious.

I must admit I was somewhat surprised as to the scope of the book when I first cracked the cover. Like most modelers, I’ve always used the terms T-54 and T-55 fairly interchangeably, as externally there are so few differences between the makes. I think I expected this book to treat them in the same manner. Instead, this book runs right into the process of creating the T-55 FROM the T-54 and never looks back.

Essentially, the Soviet military began to realize some time in the late 1950s that it was entirely likely that any major engagement between the Eastern and Western blocs would involve tactical nuclear weapons. Such a possibility would render their then-main battle tank, the T-54, nonoperational very quickly as the crews suffered from lethal radiation. The T-55 was a major under-the-skin modification intended to make such a toxic battlefield survivable, at least in the short term. Special inner linings were added, as well as ventilation systems intended to filter out fallout and keep the tank safely sealed under most conditions.

As the design engineers worked away at refining the basic tank design, they added or tested other features, including different engines, tracks, and even the driver’s seat (to make it more mine-survivable). Most of these changes were internal with very little alteration to the outside appearance, with the exception of the turret ventilator, hatches, and cannon fume extractor.

The T-55 made its first appearance in 1961, and internal changes would continue for decades thereafter as systems that had been a bit rudimentary in the T-54 were refined. Later, more external fixes would be added in the form of various stand-off armor arrangements, both by the Soviets and their allies as well as independently by other clients, such as Iraq. This book covers all the variations known, as well as engineering vehicles and the like. It does not, however, cover Israeli conversions of captured vehicles.

Each modification is thoroughly explained, and one chapter devotes some space to the various conflicts in which these machines have been used, although the information is admittedly a bit sparse and cursory. Several appendices at the end of the book, however, go further into alterations, numbers of vehicles, technical characteristics, client users, and more. A few side profiles illustrate some of the schemes used over the years, and there are numerous color photos showing variants in detail.

There is no doubt as to the thoroughness of the research in this resource. I now know more about the T-55 than I ever thought I would although, to be honest, most of that knowledge won’t directly translate into modeling, simply because so much of the change is internal. However, it’s good to have a better understanding as to why the Soviets made so many alterations over time to this venerable fighting vehicle, and to have the back history around them. I recommend this book to anyone curious about these fascinating machines and the story behind their creation. My thanks to Osprey Publishing and IPMS/USA for a chance to read this most intriguing book.