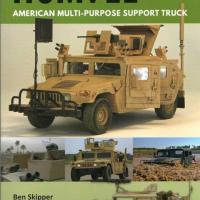 This is my second review of one of the Land Craft series books (the prior one covering the Land Rover and it’s many uses. This is the sixth in the series called “Land Craft”. As I read and reviewed the earlier book, this book covering HUMVEE no less rewarding in its comprehensive coverage of this ubiquitous vehicles. While I have seen a great many HUMVEEs I had no idea about the total numbers in service with Army (120,000) and the Marine Corps (20,000). These are very heavy, with the base weight of approximately 5,200 pounds, and the many other versions even heavier. If you are interested in the HUMVEE family of vehicles, this is a book I highly recommend.

Great reference book, with 64 pages, eight full color three view art profile depictions and excellent photos of both the real vehicles and many of the completed models—one of which are by the author himself illustrating that he’s a modeler as well as an author. In particular, the section covering ‘Humvee in Detail’ impressed me. The photos illustrated in this book are great including those covering the interior of the vehicle showing the various typical colors and shapes for such items as the dashboard, gunner’s platform and radio equipment.

The ‘Modelling Products’ section is well worth reading covering 13 pages, including his recommendations about the numerous kits on the market, including Academy, Bronco, Italeri, Tamiya and several producing smaller scale kits. I’ve finished three models of the HUMVEE to date and used a good deal of the available after-market parts to upgrade my models. In Mr. Skipper’s discussions, he provides a modeler’s insight about the pros and cons for each of the kits. And, when the manufactures produced those kits, using both other companies molds and their own original kits. A complete summary about the aftermarket parts listing the specific part numbers is also included.

I would like to conclude with the author’s summary notes about this book:

“With its characteristic wide track, low silhouette and its distinctively deep exhaust note the Humvee sets itself apart from the range of light utility trucks it replaced. Fully air-portable, the Humvee features an aluminium body seated on a steel ladder chassis, powered by a 190hp V8 engine.

Introduced into service in 1985, the Humvee remained pretty much unnoticed until its baptism of fire during the invasion of Panama in Operation Just Cause. It wasn’t until almost a year later, in Operation Desert Shield and Desert Strom that the Humvee really came into the public eye.

As a result of its newly found fame its manufacturer, American Motors General, started to produce a civilized version for public consumption, with sales and profile boosted by Hollywood patronage. At the same time the Humvee continued to serve in some of the most dangerous U.S. operations undertaken to date. From the streets of Mogadishu to the Balkans, the Humvee developed into a vehicle far removed from its original design intentions.

With some 17 variants now in service, from the basic troop carrier to the awesome Avenger Anti-Aircraft system, this Humvee LandCraft title provides the modeller with a rich vein of inspirations and subject.

This title looks at the process behind the design and development of the Humvee and how American Motors General were able to fulfil a complex design brief to deliver a single vehicle that was able to replace a host of in-service vehicles. This title will chart how the Humvee grew from a light utility truck into a versatile platform whose modesty hides its potential.

With its specially designed track, impressive ground clearance, waterproofed electronics and ability to carry a one tonne load, the first Humvees were light years ahead of the vehicles they replaced. With its unique suspension and transmission systems to its unique engine arrangement this 4x4 is capable of feats normally only afforded to tracked vehicles.

With some 17 versions in US service the Humvee fulfils its traditional role as cargo and troop carrier as well as special-weapons platform, ambulances, Direct Air Support vehicles and communications shelter vehicles.

After 35 years of service the Humvee has changed from soft skinned run-about to a lightly armoured force protection asset. Fitted with a larger engine, inter-changeable armour, specially designed escape windows and a unique blast chimney, the Humvee’s story is indeed proof that development of military vehicles never stops.

For the modeller there is nothing more important than the little things and this image-rich section of LandCrafts’ Humvee title delivers the goods. Filled with crisp images that chart the Humvee’s development, combined with informative accompanying text, forms an enviable visual guide for the enthusiast and modeller alike.”

My thanks for this review book to both Casemate Publishers and IPMS/USA for my opportunity to review, read and thoroughly enjoy this book review. I thoroughly recommend this book for all scale modelers.