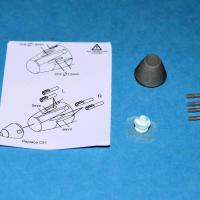 The conversion itself consists of six parts- a new nose, four cannons and a clear resin nose tip insert for the cameras that fit into the nose. The first step would be to remove the parts from the casting blocks wash the parts. Instructions show that the cannon barrels need drilled out with a 1.6mm drill and shows the exact position of the barrels when attached. After reviewing the kit, the nose would be direct replacement for the Airfix kit nose which is a separate piece so installation would be a breeze. Casting of the parts is excellent and the clear part is great but I would still do a polish and future treatment on it for extra shine.

A quick side note. In researching this variant, it was noted that the instrument panel also had some differences but considering the cockpit is black with a narrow opening, I am not sure how apparent this would be. It was also normal for the recon versions to have 2 x 230 gallons wing tanks and these would be attached to the kit also.

This is a quick conversion to get a interesting variant of the Hunter. It is very inexpensive and simple to install and is definitely recommended

My thanks to PJ Productions for the review sample.