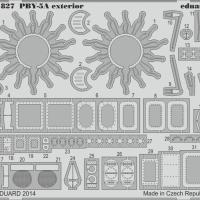 Revell’s PBY-5A Catalina has been around for 20 years now and I have seen quite a few built and it looks large and impressive when finished. The kit comes in two styles- the “-5” who has no wheel wells and the “-5A” which does. Eduard has released sets for the PBY-5A which allow improvements to the entire airframe. This set (#48827) addresses exterior details.

The first thing addressed by the photoetched set are the engines which are missing their wiring harnesses. These are well done and easily added but do take some time to get all the wires attached to the cylinders. There is also some grating for the air coolers.

The floats and wing ends get a little more detail with inspection ports on the wings and tie down points on the floats. I am surprised these aren't included in the floats set but that PE fret was packed so there may have been no room.

The exterior of the fuselage is addressed next and every window has a separate frame included. I glued in all the glass first with a masking set (Eduard naturally) attached to prevent any accidents from the glue. Next, the photoetch addresses the pitot arrangement and backing plate on the top which has all parts replaced. Also, hand holds and lugs are replaced at this point also. The lights on either wing also have supplied framing and also an additional piece which looks like it acted to block the lights from blinding the crew if they looked that way.

The front tie downs are replaced and this is followed by reinforcement plates around the cockpit as well as a tie down point on the nose. The one part I haven't added yet is the windshield wipers but that will be done after painting.

This set is subtle and doesn't try to add detail where its not needed. A good example is the window framing. If you look at pictures of the real plane, the frames are subtle but definitely there and this set adds that detail. This will really make your Catalina pop. Highly recommended.

My thanks to Eduard and IPMS/USA for the chance to review this excellent set.